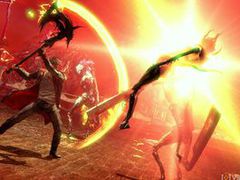 Previously announced DmC Devil May Cry DLC, Vergil’s Downfall, will be released at the end of February, Capcom has announced.

The additional content will provide players with a brand new chapter which follows the untold story of Dante’s twin brother Vergil. The add-on promises hours of gameplay, four difficulty levels and an all-new storyline, weapons, combos, enemies and locations. This will cost you 720 MS Points / £7.29.

Before this Capcom will release Bloody Palace Mode as a free of charge update, offering over 100 bonus levels featuring waves of enemy attacks.

And if you’re not aware, DmC Devil May Cry hit stores today on Xbox 360 and PS3, with the PC version to follow on January 25 – it’s well worth your time.