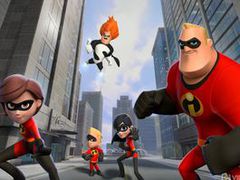 Disney has plans to release a new game in the Disney Infinity series every year, the game’s executive producer John Vignocchi has told VideoGamer.com.

Speaking to VideoGamer.com this afternoon, Vignocchi revealed that each new Infinity release would include support for additional characters, features and Play Sets planned for release within the following 12 months.

“With Infinity we’re looking at releasing versions that come out each year and those will feature all of the content [for] the year,” said Vignocchi.

Any characters created for a Disney Infinity sequel will also be compatible with the previous games as well, Vignocchi assures.

“So even if you own Infinity 1, you could buy an Infinity 2 character, [and] we would push all the animation data down the pipe into the Toy Box on Infinity 1.”

The firm is also planning on releasing new characters and Play Sets for Disney Infinity the same day a new Disney movie hits the box office, too.

“There will be a day and date release with the Play Set,” Vignocchi continued, adding that the developer had been given an “unprecedented level of access” to film-makers in order to develop the content.

“We’re planning for it. We’re planning from the outset. We’re given an unprecedented level of access to the film-makers. I’ve worked at Disney for many years now. I worked on LEGO Pirates and Disney Universe, and I’ve worked on Tron and Pirates of the Caribbean; the level of access and collaboration that we have with the film-makers on Infinity is totally different than anything that I’ve ever worked on before.

“We’re actually directly working with them, so what they’re doing is giving us access to their films as they’re in development, so we’re getting such early access that that is what is allowing us to create these Play Sets where we’re expanding on their content and collaboratively working with these film-makers to create a true transmedia experience.”

Disney Infinity launches this June on Xbox 360, PlayStation 3, Wii U, Wii and 3DS.