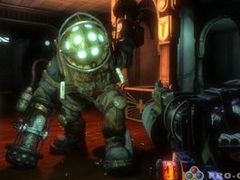 Updated on January 4, 2016 by David Scammell

UPDATE: Shortly after this story went live, 2K UK clarified that it wasn’t teasing a new BioShock for 2016 in its new year’s tweet.

“Afraid not folks,” the publisher said. “Was the only image we had that said Happy New Year in it! Happy Monday!”

But with the remaster not entirely ruled out, we can still hope, right…?

ORIGINAL STORY: Remember that rumoured PS4/Xbox One BioShock Collection? Well, 2K could have plans to send BioShock fans back to Rapture later this year, judging by a message posted earlier today.

Posting on Twitter, 2K UK hinted at a return to Rapture while wishing fans a happy new year:

“Back to work and back to Rapture!” it said. “Hope you all had a fantastic Christmas and New Year! Here’s to a great 2016!”

The tweet was joined by an image from the original BioShock (above).

The BioShock Collection was first rumoured last summer after a PS4 and Xbox One release was listed by South African retailer Raru. The game was originally rumoured for release in November 2015 although clearly that never materialised.

2K has yet to confirm plans for a new BioShock title or a remastered collection. But if it didn’t have plans to return to the franchise later this year, why would it highlight a return to Rapture in its new year’s tweet…?