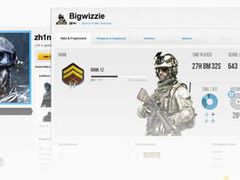 DICE has released Battleblog #3, with the focus on the all-new Battlelog, described as Battlefield 3’s “unique no-cost social network”.

“We want to make Battlefield 3 a more social gaming experience and it all starts with Battlelog,” said Fredrik Loving, Battlelog producer at DICE. “We are changing how you communicate, play, compete and share content with their friends, extending the in-game experience to be accessible from your home computer, on your handheld devices while commuting, or wherever you may be.”

The Battlefeed is your main window into Battlelog, showing current events around your network in real-time, giving you a live snapshot of what those in your network are doing in the world of Battlefield.

“The feed will encourage people to play even more,” explained Loving. “They will see their friends ranking up, receiving awards they don’t have yet, or getting the new cool guns they have been missing. It will increase the competitive edge. Everything you do on the battlefield is shared amongst your friends.”

Players will be able to see when a friend unlocks an achievement and offer them kudos. Another pal just joined a multiplayer Rush match in Operation Métro and is looking for some help – now you know, so you can quickly jump in and give them a hand. If someone just nabbed your dog tag in multiplayer, they can send you a bragging message.

“Battlefield players love their statistics,” says Loving. “Now we will give them everything that they want while adding a social layer on top of that.”

DICE will be unveiling the full suite of features found in Battlelog at a later date.

EA’s Battlelog service will be free, but Call of Duty: Elite will carry an optional subscription fee. Subscribers to the latter will get access to all Call of Duty DLC and a web series, with other unannounced features currently promised.

Battlefield 3 will be released on PC, Xbox 360, and PlayStation 3 on October 28.