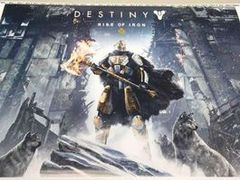 Destiny’s next major expansion will be called ‘Rise of Iron’, according to a leaked poster which has been verified by Kotaku sources. The content is expected to launch in September.

Players can allegedly expect a new raid and more content than the two year-one DLCs, The Dark Below and House of Wolves. Official details are expected at E3 next month.

The raid is said to be based on that which was cut from the House of Wolves DLC.

Destiny 2, which had originally been set to launch this holiday, is also said to have been rebooted under the leadership of Taken King director Luke Smith and is now reportedly lined-up for next autumn.

Oryx, The Taken King has arrived in our solar system, bringing with…

Oryx, The Taken King has arrived in our solar system, bringing with…