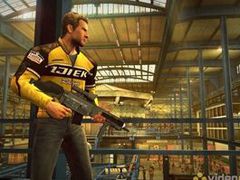 Dead Rising 2: Case West will be released on Xbox LIVE in December, Capcom has revealed.

Following on from the huge success of Case Zero – the standalone prologue which is reported to have sold 600,000 copies – Case West promises all-new content and the return of photojournalist and star of Dead Rising, Frank West.

Set immediately after the events of Dead Rising 2 Case West sees Frank team up with Chuck Greene as the pair embarks on a brand new case set in the Phenotrans Facility on the outskirts of Fortune City.

Chuck and Frank will face new challenges and new enemies, but will also have access to new weapons, items and the ability to create new Combo weapons including the janitor’s favourite, the ‘Zap & Shine’ and the ‘Reaper’.

Frank is able to take photographs of key evidence that will provide proof of Phenotrans’ part in the zombie outbreaks, not just in Fortune City, but across the United States. As the story unfolds expect to see cameo appearances from other characters from Dead Rising, too.

The game can be played cooperatively with another player or alone with Frank controlled by AI.

If the popularity of Case Zero is anything to go by, Case West should perform well on Xbox LIVE. It will be interesting to see if the follow-up can match Zero’s success, though.

Back at the launch of Case Zero there was hype around the imminent launch of the full game, and the cheap download gave Xbox 360 gamers the chance to sample the new game elements early. Come the launch of Case West players might feel they’ve had enough.