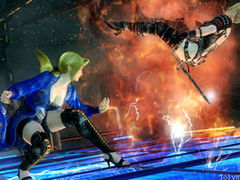 Confirmation follows a report earlier this week revealing that the game is set to launch in Japan on February 19.

A free-to-play version of the game will also be available to download on PS4 and Xbox One, Tecmo confirmed, but the terms of the offer differ between platforms.

On PS4, fans will be able to download Dead or Alive 5: Last Round Core Fighters free of charge, which grants access to four fighters – Ayane, Hayate, Kasumi and Ryu Hayabusa – and almost every game mode available. The game can then be expanded by purchasing additional characters, Story mode and “other features”.

Xbox One players, meanwhile, will have access to a free trial of Last Round featuring the same 4 fighters and features above, but it will not be expandable via additional purchases. Instead, those looking for extra content will be required to purchase either the full Last Round game or pay a “small fee” to upgrade to Core Fighters.

The Core Fighters upgrade “includes all content as the free trial,” says Tecmo, “but adds four more fighters to the mix in Hitomi, Tina, Jann Lee and Bass, and is expandable from there via additional purchases.”

VideoGamer.com has contacted Tecmo for clarification as to why there are differences between the two platforms.

Both free and premium players will be able to fight against each other online regardless of which version they pick up, while costumes, titles and Story Mode progress from the last-gen versions of Dead or Alive 5: Ultimate can also be transferred over to next-gen.

And if you are thinking about picking up the full version of Last Round, you’ll be able to grab a range of pre-order bonuses from participating retailers.

To check out the latest screenshots of Dead or Alive 5: Last Round, head through here.