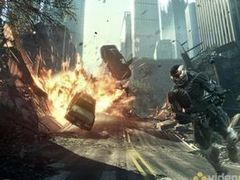 Some have suggested that the visuals of 3D-enabled games will suffer as a result of hardware strains.

The perceived wisdom is that to output in 3D, games render frames twice – an affect then translated into 3D by special glasses worn by gamers.

German developer Crytek, however, has achieved its 3D effect for upcoming multiplatform shooter Crysis 2 in a way that hardly impacts on performance.

“You will laugh now,” CEO and founder Cevat Yerli told VideoGamer.com. “Our impact is 1.5 per cent. You play 2D or 3D, you have no difference. It’s pretty much for free. People, when they ask how, I say it’s our little magic.

While Yerli refused to discuss exactly how Crytek’s “magic” 3D technology achieves such results, he did reveal one interesting titbit:

“I use the term ‘for free’, with this game. It’s so negligible. And people ask, how do you do it? I say, well, we do render only once. That isn’t magic. But we create a second image out of the first one. But how we do it is the magic. That’s the secret sauce. I’m happy that we figured it out!

“Believe me, at that point, everybody was so happy, because we knew that we would be the first game running on all platforms in 3D. That’s awesome. And it’s from the beginning until the end, one hundred percent in 3D. Which also, I think, other 3D games are not, because they’re choosing the different way of doing it, or the normal known way of doing it. Because we use it our way, our pipeline is cheaper; our work flow is cheaper. Others have to… oh no, if we switch to 3D, we have to render it twice, or we need to do this and this. They freak out.”

There’s more from the outspoken Yerli, as well as a host of other developers, over at our special 3D Gaming feature.

Crysis 2 is due out this autumn.