Constructor HD pushed back to 2017 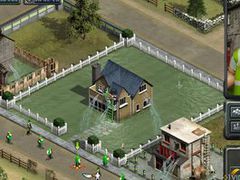 Constructor HD, the modern reimagining of the classic construction-management game, has been delayed to January 31, 2017, System 3 has confirmed.

The game had previously been due to launch later this summer, having already suffered multiple delays from its original January release date.

While the reason for the new delay isn’t known, the developer says that the game will now be translated into multiple languages, including Polish, German, Italian, French, Russian, Spanish, Dutch, Chinese, Japanese, Korean, Portuguese “as well as a special American English version just for our US buddies that don’t understand the Brit humour thing like ‘plank’ and ‘plonker'”.

In addition, starting in October, those who pre-order the game will receive the original PC version for free, along with some extra “DLC buildings” in next year’s game. It isn’t quite clear whether the free PC version will also be given to console players, however, or whether it’ll be available exclusively to PC customers.

Constructor first launched on PC way back in 1997. I remember trading in some PSOne games in at my local indie games shop to buy it.

Classic PC strategy game heads to Xbox One, PS4 and PC with…

Classic PC strategy game heads to Xbox One, PS4 and PC with…