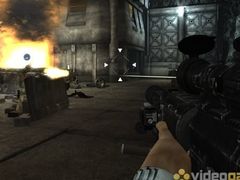 Eidos has confirmed that Conflict: Denied Ops, the fifth game in the multi-million selling Conflict series, will definitely be coming out on Friday 8 February.

There had been some confusion over when in February the game would see the light of day, with different retailers listing different dates.

Today Denied Ops publisher Eidos confirmed to VideoGamer.com that the game, designed primarily for two-player co-op play, will indeed be coming out on 8 February. Time to get the old diary out then.