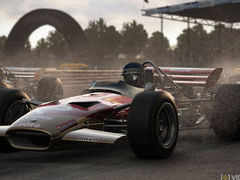 All players, meanwhile, will be able to download the 1970 Lotus Type 49C Cosworth for free.

Project CARS is available now on PS4, Xbox One and PC.