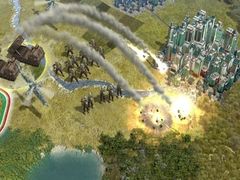 In addition to a copy of Civilization V, the following items are included in the Special Edition:

– DVD “Behind the Scenes at Firaxis on Civilization V”