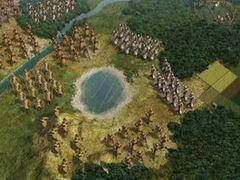 2K Games has announced that Sid Meier’s Civilization V, the latest entry in the strategy franchise, is currently in development at Firaxis Games for PC.

Civilization V promises to reinvigorate the classic turn-based strategy genre thanks to an “astonishing new engine built from the ground-up” for the title. Fans can look forward to an entirely new combat system, deeper diplomatic interactions and a host of expanded features.

Wars between empires will dominate the landscape, and combat will take on new strategies with the addition of ranged bombardment, allowing players to fire weapons from behind the front lines.

All the new additions to gameplay and visuals will be supported by an extensive suite of community, modding and multiplayer elements, details of which will be revealed at a later date.

“Each new version of Civilization presents exciting challenges for our team,” said Sid Meier, director of creative development at Firaxis Games. “Thankfully, ideas on how to bring new and fun experiences to Civ players never seem to stop flowing. From fully animated leaders and realistic landscapes, new combat tactics, expanded diplomacy and shared mods, we’re excited for players to see the new vision our team at Firaxis has brought to the series.”

Civilization V is scheduled for release this autumn on PC.