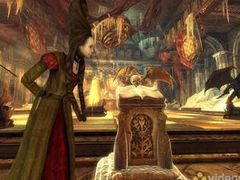 A sequel to Castlevania: Lords of Shadow looks increasingly likely, with producer David Cox tweeting about a pending announcement.

“Today and tomorrow I am in the land of Dracul. What am I doing there? You will see,” Cox posted on Twitter.

Cox refused to give any more information, but if his tweet isn’t about Lords of Shadow it would be a huge surprise. The original Lords of Shadow launched in 2010 and earned an excellent 9/10 in our review.

Castlevania: Lords of Shadow was one of my favourite games of 2010, delivering one of the richest fantasy worlds in video games and some great combat. Sales weren’t incredible, but hopefully a sequel will sell better due to there already being an expectant fan-base.