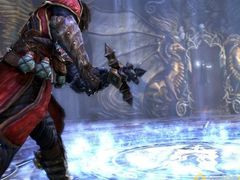 Castlevania: Lords of Shadow coming to Wii U, 360, PS3 and Vita according to report

A sequel to Castlevania: Lords of Shadow is coming to Wii U, Xbox 360, PlayStation 3 and PS Vita if an online report is to be believed.

The rumour, posted on Paul Gale Network (the same site that posted the first info on PS3 game PlayStation All-Stars Battle Royale), states that the game is once again in development at Mercury Steam and will be revealed at E3 next month.

PGN also reveals information on a 3DS spin-off titled Castlevania: Mirror of Fate, a game which was originally due to be released on the Wii U as well. In the game the 3DS uses its forward-facing camera as a mirror and the outward-facing camera for puzzle solving.

According to PGN the Wii U game was to be the same game as on 3DS, splitting the action between the Wii U tablet and the TV screen.

We’ve been waiting patiently for news on Lords of Shadow 2 ever since the original game earned a brilliant 9/10 in our review. If this rumour is true expect to see an official reveal at E3 in just two weeks.

It will be interesting to see how the Vita version compares to the home console games, with those likely to be among the most graphically impressive titles of this generation.