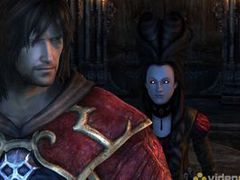 Reverie, the first of two planned Castlevania: Lords of Shadow DLC packs, will now be released in March, Konami has announced via the game’s Facebook page.

In Castlevania Lords of Shadow Reverie players will return to the Castle as Gabriel to help Laura, the former servant to the vampire Carmilla, in destroying the evil that was previously kept in check by the recently slain Queen.

Following at a later date will be Resurrection DLC which continues the story directly after the end of the game and gives some insight into epilogue seen by players upon completion of the game. This is said to be larger in scope than the first add-on and features a final showdown with a very notorious enemy.

Castlevania: Lords of Shadow launched back in October 2010 and we can’t help but think that the DLC is arriving too late.

We also imagine Konami will be following the DLC releases with what is now the quite common ‘ultimate’ or ‘game of the year’ edition which bundles DLC content with the original game in one retail package. Considering the game failed to achieve the strong sales it deserved (we awarded it 9/10), hopefully a bumper re-release will earn publisher Konami some extra sales.