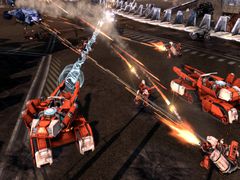 Can End of Nations be the EverQuest of MMORTS?

End of Nations is flying the banner for MMORTS games, but does it have the formula to popularise strategy gaming within the general public? We talk to former EverQuest developer Chris Lena, who is currently working on the game as senior producer, about the state of RTS, Westwood Studios, and mainstream gamers.

Q: Let’s talk about you.

Q: You started out working on EverQuest. Can you talk about your progression from EQ to End of Nations?

CL: So yeah, I worked on EverQuest for quite a number of years. Which was great, working on a lot of products and really understanding what it means to work with a community and be able to respond. So through that I worked on a couple things at Sony Online, then I went to Cryptic Studios for a while. And then I made my way to Trion. So I’ve had a fairly long career, mostly in MMOs.

Q: Can you talk about what you’ve actually learned from the previous games that you’ve worked on, then?

CL: Yeah, I mean we’ll start with EverQuest. An honour to work on the game, but really it shows you people are really involved in the game, they’re very attached to it so having a respect for the player and actually working with feedback from the player, I learned a lot of that from EverQuest.

And then I operated a free-to-play game at one point – Dragonica Online, Korean developed – so I learned a lot there too about the free-to-play model, and just like every online gamer to respect the player in the free-to-play sense as well. Understanding that although there’s a lot of ways you can get people to give you money if you want longevity with a game you really have to treat them with respect and understand they’re putting in their time and effort.

Q: So are you a complete free-to-play convert now?

Q: So how does this work in a business sense?

CL: The client is completely free and we sell of course things like the vanity items, skins, experience point boosts, that sort of thing. Also a couple other things that we’re using a dual currency for so either in-game money or using real money.

Q: Obviously this model has worked wonders for smaller MMOs. Can you see it being picked up by some of the bigger titles in the industry within the next few years?

CL: That’s what we’re doing. We think the time is right in the Western world when you can make really high quality games that are free-to-play and still be successful.

Q: When you developed EQ you were creating a virtual world. End of Nations follows more of a formal game structure. How did the experiences differ for designing both of these vastly different MMOs?

CL: Well when you’re creating a virtual world, when that’s important, the immersion factor and having the overall feel becomes really important. With a game like End of Nations, although I think the story is really important, it’s more about the gameplay. It’s more about balance and gameplay and really making the type of experience fun. Rather than a world to work in, live in, and explore.

Q: What sort of player is this for then?

CL: Of course it’s for everyone! No it’s an interesting question because we think strategy games, RTS, games in general, a lot of people have been scared off by them. Because they’ve become in some ways kind of hardcore. For most people the idea of jumping on and playing a PvP match in an RTS is extremely frightening. So we think we will be able to broaden the audience in a couple ways.

The lack of base building is actually a real advantage to the average user, you don’t have to micro-manage all that stuff around the map. Also just the fact that it’s multiplayer you don’t have to be in that one-on-one experience – you can be the 28th person in a team and just help out and kind of ease into things. We think the gameplay itself is going to reach a much wider audience so people who are currently RTS players, people who are lapsed RTS players, the free-to-play aspect is likely to bring in a lot of people who are willing to try, and hopefully they like it.

Q: Is there any worry that is going to isolate the hardcore market then?

CL: I think we’re offering something unique to them. They’re used to competing in a way that is one-on-one, learning the units, and that’s part of the game and we have that. But we have a new challenge for them – can they organise 4 people or 8 people or 28 people, can they really function as a team instead of as an individual. So our hope is in offering that it will be something they’re interested in.

Q: What is the current state of the RTS market in your opinion?

CL: I think there’s a lot of great RTS games out there. They’re just giving the same thing they’ve always been giving, which seems… FPS and RPGs all add more persistence, go online, but the RTS market really hasn’t.

Q: Why do you think that is?

CL: It’s a good question, that’s why we’re doing it. We see a hole there and we like a lot of the aspects of the massiveness, and it makes sense to put it in an RTS. At least we think it does.

Q: Is it a fear of change or is the market not asking for change?

CL: You’d have to ask them! I think a lot of people get a formula and that works, and you can’t argue with the popularity of some of those games, and they are great games.

Q: What issues in the genre are you trying to fix?

CL: Some of the things like making it more inviting to a wider group of people with some of those gameplay changes and I think we’ve all found that games are more fun when you’re playing them with other people. So all the social features you can add on top of a game – friends lists, chat, all that. The persistence so you have more of an attachment to the game, I think that helps with the enjoyment as well. And just the unique aspects that come from the interaction of people.

Q: You’re coming from a very strong history of RTS titles with Westwood (whose former employees make up some of EoN’s team), what has their influence been on this game?

CL: They influence almost by accident. The easiest thing to point out is the sound and music. Frank Klepacki does it, he worked on Command & Conquer, Blade Runner, and you get a little bit of that feel. So we can get a little bit of that nostalgia there too. They’ve been making RTS games for as long as they’ve existed so that experience comes out in a lot of different ways.

Q: Why is it so rare to see cross-genre MMOs like this?

Q: Do you have spectator mode or replays in this?

CL: We don’t have that feature in yet but we definitely will add that and continue to add more features that will make it even more appealing in a competitive way.

Q: So you do have e-sports ambitions?

CL: We’d love to. At launch we’re just trying to have a really good game but we take e-sports very seriously so it’s about dialogue and what features they would like to see.