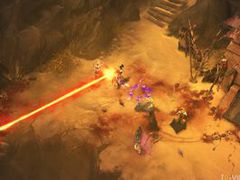 After promising yesterday that it would ban cheaters from Diablo 3, Blizzard has announced it has given “several thousand” players the boot.

“We recently issued a round of account suspensions and bans to several thousand Diablo III players who were in violation of the Battle.net Terms of Use for cheating and/or using botting or hacking programs while playing,” said community manager Zarhym on the Battle.net forums.

Diablo 3’s requires players to be permanently connected to the Battle.net servers, which means an account ban completely removes players’ ability to access the game.

“In addition to undermining the spirit of fair play that’s essential to everyone’s enjoyment of the game, botting, hacking, and other such exploitive behaviour can contribute to stability and performance issues with the Battle.net service,” added Zarhym.

“As always, maintaining a stable, safe, and fun online-gaming experience for legitimate players is a top priority for us, and we’ll be continuing to keep watch on Battle.net and take action as needed.”

An item-duplication bug has recently been found in the game, and these bans come as Blizzard launches its real-money auction house service in America, with a European launch scheduled to arrive later this week.

Update: According to an in-game notification, the real-money auction house will open in Europe on Friday.