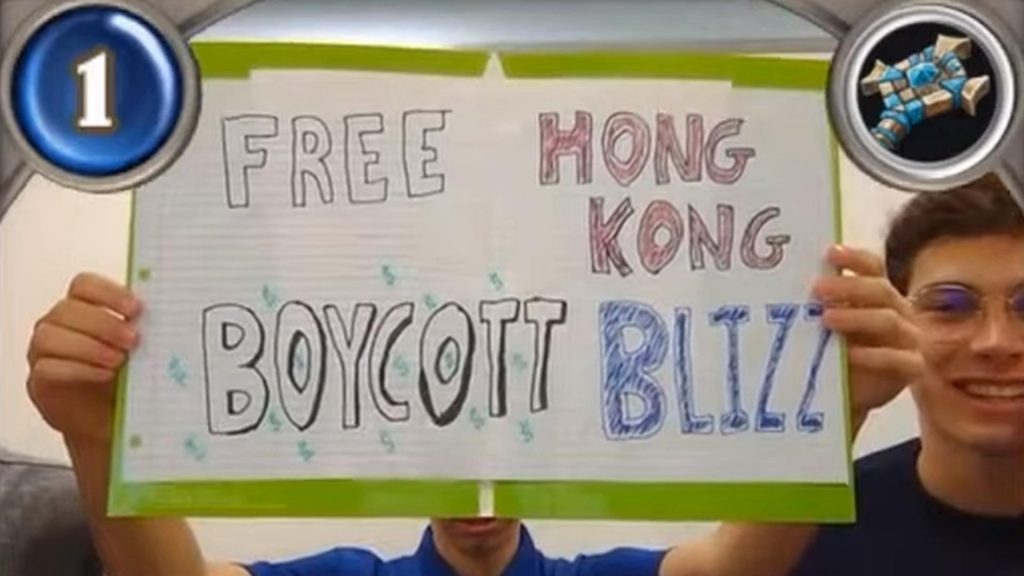 The American University Hearthstone team have been banned from competitive tournaments for holding up a sign that said ‘Free Hong Kong, Boycott Blizz’ during the American Collegiate Hearthstone Championship (via Reddit).

At Hearthstone Grandmasters, Hearthstone winner Ng ‘blitzchung’ Wai Chung voiced his support for Hong Kong protestors in an interview. In consequence, Blizzard Taiwan deleted his interview from its official Twitch channel, removed Blitzchung from Grandmasters, pulled his prize money, and banned him from Hearthstone for 12 months. It said that his comments violated the rules of the competition and were deemed to be ‘engaging in any act that, in Blizzard’s sole discretion, brings you into public disrepute, offends a portion or group of the public, or otherwise damages Blizzard image.’

Blitzschung was well aware of the potential repercussions of his actions and support outpoured for him from the community. #BoycottBlizzard trended across social media and during  the American Collegiate Hearthstone Championship, American University players held up a sign that said, ‘Free Hong Kong, Boycott Blizz.’

Blizzard has since walked back on its sanctions imposed on Blitzschung and he will receive his prize money and his ban has been reduced to six months. It stressed that Chinese stakeholder Tencent had 'no influence on our decision’ in an official statement. ‘The official broadcast needs to be about the tournament and to be a place where all are welcome,’ Blizzard justified. ‘In support of that, we want to keep the official channels focused on the game.’

As such, the American University Hearthstone team have been banned from competitive tournaments for six months. Team member Casey Chambers received the email from Blizzard yesterday that said the team violated rule 7.1B: ‘participants may not take any action or perform any gesture directed at another participant, Tespa Admin, or any other party or incite others to do the same which is abusive, insulting, mocking, or disruptive.’