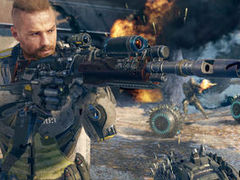 Call of Duty: Black Ops 3’s ‘Awakening’ DLC will be the first and last piece of DLC released for the shooter on PS3, Activision has confirmed. Future Black Ops 3 DLC, including the three expansion packs planned for release later this year, will not be available on last-gen.

The news was confirmed in an FAQ posted by Activision support, which states that the publisher does not have any plans to release any future DLC map packs or Zombies content on PS3 following next week’s release of Awakening. A reason for abandoning future DLC on last-gen is not disclosed.

The release of Awakening on PS3 comes as somewhat of a surprise, of course, after it was previously believed to be exclusive to current-gen consoles and PC. The DLC will finally arrive on PS3 next Tuesday, April 5, two months after its debut on PS4. It does not appear, however, to be coming to Xbox 360.

The first details on Black Ops 3’s second DLC expansion pack are due to be revealed later today.