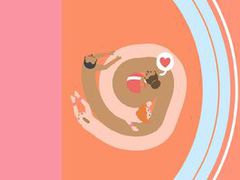 Bizarre multiplayer indie game Push Me Pull You will release for PS4 on May 3, developer House House has announced.

The local multiplayer game sees players sharing control of a character with a really long and wriggly body, competing with another pair of players.

Check the trailer below for a better idea of what is going on.

The game will also launch for Windows, Mac and Linux soon via Steam, itch.io and the Humble Store.

Push Me Pull You

Push Me Pull You