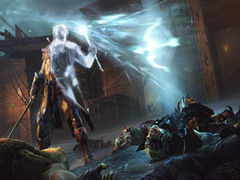 ORIGINAL REPORT: The Xbox 360 and PlayStation 3 versions of Middle-earth: Shadow of Mordor are being developed by Naughty Bear studio Behaviour Interactive, according to the latest issue of Game Informer.

Only the PS4, Xbox One and PC versions are being developed by Monolith, the mag says.

Monolith warned fans to expect fairly substantial differences between the last and current-gen versions following the game’s reveal earlier this year, with neither the 360 and PS3 versions expected to make full use of the game’s Nemesis System.