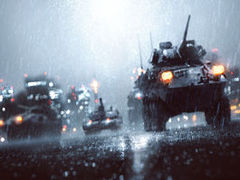 After a week of teasing, hype-building and leaks, EA and DICE finally took to the stage to reveal Battlefield 4 and its new engine Frostbite 3. But Battlefield 4’s announcement asked as many questions as it answered.

With the dust still settling, VideoGamer.com sat down with creative director Lars Gustavsson to try and find out more about the technology behind the game, its multiplayer, and whether it’s coming to next-gen platforms…

VideoGamer.com: Congratulations on today’s reveal. The technology behind Battlefield 4 looks incredible. But is it next-gen?

Lars Gustavsson, Creative Director, Battlefield 4: Is it next-gen in your brain? Does it feel next-gen to you? [laughs] It was a PC build and what we’re talking about here today is really about a beautiful piece of software, a scalable engine that is built to hopefully last for a long time, so we’re not going into talking about next-gen. We’re definitely pleased to see the outcome of Sony’s conference, and we’re all gamers and interested [in next-gen], so there’s definitely an interesting future ahead, but right here, right now, it’s PC, Xbox and PlayStation 3.

So you can’t confirm that it’s coming to PlayStation 4 or Microsoft’s next-gen Xbox?

Why is that? Is it because it might be shown at Microsoft’s next-gen announcement?

LG: It’s more [because] here, right now, we want the focus to be on the single-player demo. When we built this engine, I think we already felt when we did Battlefield 3 with Frostbite 2 that it was kind of a power horse. It had enormous potential. We talked then about next-generation technology on the current generation of platforms, and I still have that feeling that we’ve done so many tech improvements in that engine that are, in many ways, just making things look more beautiful for a cheaper cost. So a lot of it is work improvements, but overall it is a great powerful engine.

The announcement of Frostbite 3 took me surprise, because Frostbite 2 was always billed as a next-gen engine, and the Xbox 360 and PlayStation 3 versions of Battlefield 3 were vastly different to the PC version. Why did you decide to go straight to Frostbite 3 rather than…

Is that a good word? Would you have been lingering?

LG: Do you want an honest answer?

LG: I’ve been on a journey. In April, [I will have spent] 14 years with Battlefield. I was in on the first prototype; producer of 1942; lead designer of Battlefield 2, and always we kind of… Even Refraction Games before it became part of DICE, both studios have been building their own tech, so we’ve been tech-savvy from the start and it’s been in our genes to do it and to try to do more.

Sometimes we need to hold ourselves back. For example, with Bad Company 2 we didn’t go out with… It is the same engine but we’ve done so many improvements to it. Overall we’ve learned to handle it better. Sometimes I think in media it might be better to talk about, ‘We have number 4, number 5, number 6,’ but in the end it’s the outcome that matters, and I think that’s up to the eye of the beholder. There were numerous things that we just felt that, if we wanted to take the leap… If we talk about what we tried to push really hard with our single-player, and that is the characters, the human experience, dramatic, believable. We hired some serious actors: Michael K Williams from The Wire. So you need to have a great actor to deliver a great experience. At the same time, maybe you need great tech to deliver upon it in the game, so they need to all match, and we really tried to double-down wherever we can to sell this experience.

So for us, the tech is just a tool that allows us to hopefully bridge the gap of [getting the player to] stop looking at the animations. It sounds odd to spend all this money to build a new engine to hopefully make you stop looking at the things we’ve done and just be part of the game, and your choices, your actions as we open it up more and give you more freedom.

Will there be a noticeable difference on those platforms between Frostbite 2 and Frostbite 3, or will the real difference come in the higher-end specifications?

LG: Our aim and desire is definitely to push it on all platforms and make the most of them. As I mentioned before, there are so many things that we do now that might actually save memory, that we pushed the boundaries last time, now we’ve come up with better ways of doing it. It looks better and it’s actually cheaper to do it. It’s always a haggle, but in short steps we need to build the game scalable so that it cannot really feel like it’s not built for that platform. That’s something we’ve carried with us for a long time. There was a [lot of] scepticism with Bad Company 1 that, ‘Have you started to build Battlefield for console?’ Or even Modern Combat.

That was one of the very first Xbox 360 games.

LG: Yeah. PlayStation 2 and then it came to Xbox. We’ve tried to stay true to whatever platform you have and not delivering would be a failure.

Is there a Wii U version?

Was that a business decision, or is it to do with engine restrictions?

LG: I think overall for me as creative director, number one is to deliver a really great game and experience. Sometimes, at least for us, it’s focus on what you do well and what you know well, and ensure that you deliver something good than trying a bit too much, stretching yourself too thin and risking it. I’d rather play it safe, deliver something really good and then look at the future and what could possibly be done than trying a bit too hard and then, flat.

Will Battlefield ever be a 60fps game on console? Obviously PC allows for that, but in the war between Call of Duty and Battlefield, Activision has always used that 60 frames capability as a marketing buzzword. Would you ever hope to match that, or are you happy with Battlefield sticking to 30fps on console?

LG: It’s hard to say. The demo today, for example, on PC ran in 60fps. We’re still finding out what this engine can do and pushing the boundaries, so while I’m sitting here the people are hard at work at the studio. The next time we meet, I can probably tell you more about what we’ve found out.

There were a few different rumours that leaked towards the end of last year, and obviously there’s the setting with China and the three factions. I understand that you’re not prepared to talk much about multiplayer today, but with there being the US, the Russians and the Chinese, that would feed back into the multiplayer, presumably?

LG: Presumably [laughs]. My personal feeling is that I’m just extremely happy how people are picking up on everything we do and are excited to see what we’re doing, and I’m so excited to be able to finally start talking about it. More information will definitely come very soon.

We were shown a shot of a female soldier during today’s presentation. Will there be playable female characters in Battlefield 4’s single or multiplayer?

LG: I can already now say that you won’t be able to play female in multiplayer. When it comes to single-player, last time you shuffled around numerous characters as you played and it was more about the geopolitical events. This time around, everything from direction to actors, to how we built the engine to deliver the human experience and connection to these digital actors, we’ve also chosen to go for one main character that you play, and with that, that is not a woman, as you might have noticed. The geopolitics is more of a backdrop to what happens, it’s more [about] you and your group, and we chose to pick a man for it. It seemed to suit the story.

Why did you choose not to introduce female soldiers to the multiplayer? That was a rumour that I think a lot of people expected to happen.

LG: Slightly back to your Wii U question; trust me, there are a million things I would like to do, it’s just that you can’t pick them all. I have the deepest respect for the men and the women who choose to do military service. It’s not that anyone is better or worse. It’s definitely a valid question that we asked ourselves.

Do you think you’ve done enough to beat Call of Duty this year?

LG: To be honest, I don’t know what they[‘re doing]. And secondly, we are more focusing on what we did right and wrong in Battlefield 3, and where we see that we can improve. [We] strongly believe in our Battlefield concept and where we can push the boundaries, so hopefully all of that sums up to something that gamers will want. Whether that is Call of Duty gamers or any other type of gamer, they’re all welcome. And it’s not like we’re fighting Call of Duty or anyone else. We’re mainly fighting ourselves. We want to push ourselves harder.

Battlefield 4 launches on Xbox 360, PlayStation 3 and PC in autumn 2013. Next-generation console versions have yet to be announced.