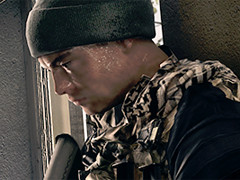 The PlayStation 4 version of Battlefield 4 requires 34.9GB of storage space, VideoGamer.com can reveal.

In comparison, the PC version requires around 24GB, while a complete installation of the Xbox 360 version comes in at around 14GB. An installation size for the Xbox One version is not yet known.

The PS4 install size comes in slightly below that of rival shooters Call of Duty: Ghosts and Killzone: Shadow Fall, which are said to require 49GB and 39.7GB respectively. Knack is also expected to require around 37GB.

PlayStation 4 ships with an internal 500GB hard drive, but with large mandatory installations, it’s looking increasingly likely that gamers will be able to max out the available space in no time.

Battlefield 4 launches on Xbox 360, PlayStation 3 and PC this Friday, November 1, with Xbox One and PlayStation 4 versions to follow at the launch of each console.