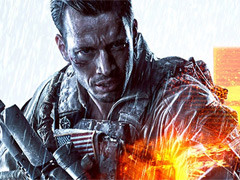 Battlefield 4 on PS4 & Xbox One – ‘We need to compromise in some places,’ says DICE

The PC version of Battlefield 4 will look better than the PlayStation 4 and Xbox One versions, executive producer Patrick Bach has suggested, telling VideoGamer.com that DICE is “doing as much as [it] can” with the next-gen versions, “but we need to compromise in some places”.

Discussing the differences between the PC and next-gen versions of Battlefield 4, Bach said that “from a CPU/GPU perspective, no, [PS4 & Xbox One cannot match PC].

“PC will always be… You can just add more to a PC. There’s always more. The game supports to a big extent better hardware, but not completely, so it won’t be night and day.”

The PS4 demo of Battlefield 4 on display at Gamescom last week appeared to be somewhat lacking in comparison to previous PC demos, with IGN calling the visuals “soft and muddled” and outfitted with wall textures that “looked half-finished, lacking some of the smaller material nuances or 3D variation”.

Whether the final game will look as good on next-gen consoles as the ‘Fishing in Baku’ footage shown during the initial reveal still isn’t certain, however.

“I try to remember what it looked like back then,” Bach adds. “To me it’s back then! It has come a long way. This is why I’m not completely sure on how to answer the question, because some people might not see the difference. When they look at it, [they’ll say,] ‘Yes, it looks exactly the same.’ To me, I will see the difference because there are so many levels of fidelity that is for some people hard to spot. The experience will be very, very similar, but then what it is might not be the same.”

Asked whether he was happy with the final system specs of PS4 and Xbox One, Bach said: “I’m never happy. I always feel like there’s more that we can do [and] there’s always more that other people could do.”

But does he wish they offered more?

“Of course I do. I want PCs to be twice as fast as well. I think [PS4 & Xbox One] will do what they are supposed to do. They will move console gaming farther. It will take console gaming into a new generation. Then the question is, could they have done more? Yes. Would it cost the same? No. It would be twice the price. Would that be a reasonable thing to sell to consumers? Probably not.

“But then again, there’s always a balance, and the same for us. There’s always a balance. ‘You should have done more with Battlefield 4.’ It’s like, well, we do as much as we can but we need to compromise in some places, and in other places we don’t compromise at all, and you think we should have done the opposite. Sorry, that’s our creative choice. I think that both Microsoft and Sony, they probably have very clever people finding the right balance where you get the most bang for the right buck. And I think looking at that and looking at from what I understand when it comes to pricing that they are hitting a very good target.”

Despite the differences between the PC and PS4/Xbox One versions, though, Bach believes that the next-gen release of Battlefield 4 marks an exciting milestone for the series.

“I think the cool thing that we are extremely excited about is that you will, for the first time, get a full Battlefield experience on a console,” he adds. “It’s the same core, it’s the same game, it’s the same feature set, there’s nothing left out, so to speak. But there’s also the 64 players, 60FPS experience that you haven’t really seen on a console previously which will move it up a big notch and eliminate some of the gap between PC and console.

“Then it’s more of a question on graphical fidelity, graphical detail and stuff like that. But then on the other hand, [PS4 & Xbox One] have some cool features that [benefit] it being a console game. You know, how Battlelog is integrated into the game in a much better way, you have the second screen features, you have the whole friends network which is super nifty on the consoles, and stuff like that.”

Battlefield 4 launches on Xbox 360, PlayStation 3 and PC on November 1, with Xbox One and PlayStation 4 versions expected to follow at each console’s launch.