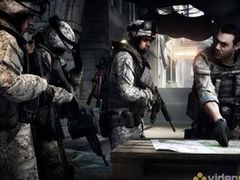 Battlefield 3 next-gen remake ‘wouldn’t be worth it’

DICE has no plans to re-release Battlefield 3 on PlayStation 4 or Xbox One, despite the PC version already appearing ready to make the jump to next-gen.

Discussing the possibility of a next-gen port during Gamescom, executive producer Patrick Bach said that he “would not rehash [Battlefield 3 for PS4 & Xbox One].

“It wouldn’t be worth it. I think it’s better to bring back the maps like we’re doing and then maybe there’s some other fan favourite that people really want and we can probably bring that back as well. But the feature set and the core game of Battlefield 3 versus Battlefield 4, it would be going backwards in time.”

Bach suggests that going back to Battlefield 3 after Battlefield 4 would seem pointless, given that “there’s nothing that is better in BF3”.

“There’s nothing really in Battlefield 3 that’s better than Battlefield 4, in my opinion. Of course, people might not agree, but in my book there’s nothing that is better in BF3, so why bring it back? That would be a very retro thing to do. Maybe two generations ahead we can do that and do like a retro rehash, but then I think people will always pick Battlefield 4 to do that.”

Battlefield 3 launched on Xbox 360, PlayStation 3 and PC in October 2011, with the PC version boasting significantly better visuals and enhanced features over the console releases.

The major difference between the two versions – the lower frame rate and lack of 64 players in the console versions – is set to be rectified with the upcoming PlayStation 4 and Xbox One release of Battlefield 4. But the game will still look better on PC…