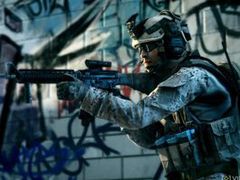 The Battlefield 3 multiplayer beta will open to all players on Xbox 360, PlayStation 3 and PC on September 29, DICE has announced.

The beta is set in Paris on the Operation Metro map, where players work their way from lush parks on the outskirts of the city to a dark, bombed-out metro station, to the vibrant streets around the Paris stock exchange. Two elite tactical units square off in Rush Mode. One side takes the offensive by attacking M-COM stations while the opposing squad defends and protects.

Players are also invited to join the EA Gun Club for the latest shooter news, and to receive in-game benefits including access to the M1911 pistol and distinct badges in Battlefield 3. The M1911 pistol will also be available to registered Battlefield veterans.

You can find a BF3 beta FAQ here.

Battlefield 3 will be released October 28 for Xbox 360, PlayStation 3 and PC.