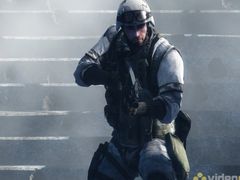 According to an update on the Battlefield blog, the access to the in-game store will start things off by giving VIP members access to the Rush map Nelson Bay, and the Conquest map Laguna Alta.

Bad Company 2 has suffered server problems across all platforms since its release last week.

Yesterday DICE revealed Bad Company 2 saw 400 per cent higher peak traffic over the weekend than any other Battlefield game.

DICE said: “While the Xbox 360 and PC aren’t getting a client update today [yesterday] we will of course be watching them at DICE and EA, making sure the servers keep running and let you game as much Battlefield time as possible.

“We have been discussing a few issues on the official forums and provided some temporary solutions for PC gamers’ problems while we work on a more permanent solution for them at DICE.

“You can find the discussions about PB INIT errors and faster browsing tips at: http://forums.electronicarts.co.uk/battlefield-bad-company-2-pc/.”

To find out why DICE’s latest shooter is worth soldiering through server issued, head over to our Battlefield Bad Company 2 review.