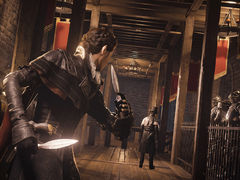 Assassin’s Creed Syndicate will have not one, but two day one patches, Ubisoft Montreal community developer Gabe Graziani has clarified.

Taking to the game’s official reddit to respond to rumours of an 18GB day one patch, Graziani wrote: “We actually have two patches that will be available on Day 1. The first patch (titled 1.10) will be 541MB, the second (titled 1.11) will be 534MB.

“Not sure where 18GB came from… neither of the patches you will need to download are anywhere near that big.”

Assassin’s Creed community manager Justin Kruger also confirmed that the PS4 install size will be around 43GB, with Xbox One at about 40GB.

Assassin’s Creed Syndicate launches in the UK on Friday.