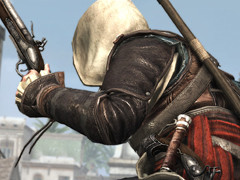 Two of this year’s biggest titles have seen a huge decline in opening week sales compared to previous releases, MCV has revealed.

It also states that first week sales of FIFA 14 were down 24 per cent over last year’s FIFA 13.

Though the fall in sales is partly to be expected given the imminent arrival of next-gen consoles, there’s still uncertainty over whether sales will meet those of previous releases even when the consoles finally arrive.

“We’ve never had two must-have consoles launched so close together,” Dorian Bloch, director at GfK Chart-Track told MCV. “The unquantifiable question is, how many consumers are waiting on these franchises for a few more weeks?

“How many PS4s and Xbox Ones will have sold by Christmas? I would say, let the dust settle on 2013 and then we will know more.”

Assassin’s Creed 4: Black Flag entered this week’s chart at No.1 with Battlefield 4 following in second place. Call of Duty: Ghosts is expected to take the top spot next week.

Xbox One is the first next-gen console to arrive in the UK, launching on November 22, with PlayStation 4 following one week later on November 29.