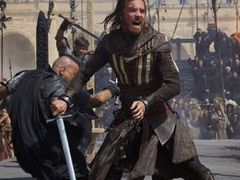 This year’s Assassin’s Creed movie isn’t going to make Ubisoft a lot of money, the publisher has acknowledged. Instead, the intention for the film is to put the franchise in front of more people and attract them into buying next year’s game.

Discussing the movie with MCV, Ubisoft EMEA executive director Alain Corre explained: “We are not going to earn a lot of money from it. It is a lot more a marketing thing, it is also good for the image of the brand.

“Although we will make some money, it is not the purpose of this movie. The purpose is to bring Assassin’s Creed to more people. We have our core fans, but what we would like is to put this franchise in front of a lot more people who, maybe, will then pick up future Assassin’s Creed games.”

The Assassin’s Creed film is due out this Christmas and is set to star Michael Fassbender as a brand new assassin. It is not expected to tie in directly with any existing or future Assassin’s Creed video games.

As well as Assassin’s Creed, Ubisoft also has films based on Watch Dogs and The Division in the works.