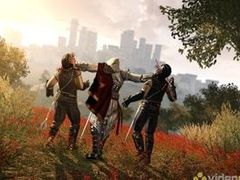 Ubisoft has revealed it will release a new retail version of Assassin’s Creed II on June 4 for Xbox 360 and PS3.

Dubbed the Complete Edition, the re-release will feature the original game plus DLC expansions, The Battle of Forli and Bonfire of the Vanites. You’ll also get three Templar Secret locations that were previously only available in the special Assassin’s Creed II: Black Edition

In case you’re wondering, we thought Assassin’s Creed 2 was rather good.