Assassin's Creed Chronicles is a trilogy; all three games due by autumn - VideoGamer.com 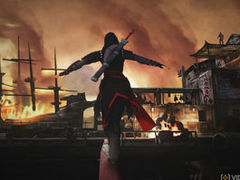 Assassin’s Creed Chronicles is a trilogy; all three games due by autumn

All three games are being created by Silent Hill: Shattered Memories developer Climax Studios in collaboration with Ubisoft Montreal, and promise to deliver a new 2.5D “tension-filled stealth” experience inspired by games in the Metroidvania genre.

“Assassin’s Creed Chronicles take players to three distinct civilizations and periods throughout history including the Ming dynasty at the start of its downfall, the Sikh Empire as it prepares for war in India, and the aftermath of the Red October revolution,” says Ubisoft.

“Designed for masters of stealth who share a passion for rewriting history with games, Assassin’s Creed Chronicles let players embody Assassins Shao Jun, Arbaaz Mir, and NikolaÃ¯ Orelov in a 2.5D reimagining of the Assassin’s Creed universe. Slay from the shadows, in a collection of stunning, living paintings.”

While each game will feature its own standalone setting, characters, art style and assassin, they’ll all be tied together in an overarching narrative. Ubisoft encourages players to play all three in order of release to experience the full impact of the story.

Assassin’s Creed Chronicles: China will be available at no additional cost to players who purchased the Assassin’s Creed: Unity Season Pass, although a standalone price has yet to be announced.

Jim went hands-on with both China and India last week. And yeah, look, there’s a video of him wearing a funny hat below.