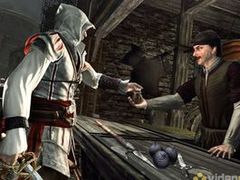 Assassin’s Creed 2 will be the next free title available in Xbox LIVE’s Games With Gold promotion, Major Nelson has confirmed.

The news means that Xbox LIVE Gold members will be able to download Ezio’s open-world adventure free of charge from July 16.

Some Xbox LIVE Gold members had expected July’s free titles to include Halo 3 and Assassin’s Creed 2, and were left disappointed when Microsoft announced that XBLA title Defense Grid: The Awakening would be this month’s first freebie.

“Not sure how people started to assume that [Halo 3] and [Assassin’s Creed 2] were coming in July,” he said. “I thought it was pretty clear in the briefing, but I guess not that clear.”

It isn’t yet known when Halo 3 will be available.