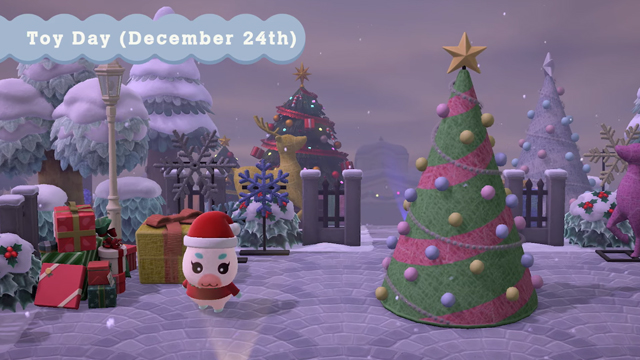 The update will bring a whole host of seasonal changes to the game, including two big island-wide events based on real-world holidays; Turkey Day (based on Thanksgiving) will be first on November 26, and will see chef Franklin come to visit your island, tasking you with bringing him some fresh ingredients in order to treat your islanders to a celebatory feast.

Then December 24 will be Toy Day (based on Christmas) where you'll be able to pick up a bunch of festive decorations for your island in the run-up to the big day, and Jingle the black-nosed reindeer will be making his rounds on the day itself, tasking you with handing out presents to your fellow residents.

The update will also bring the long-awaited functionality to be able to transfer save data and users to another Nintendo Switch consoles, so if you're getting a new Nintendo Switch in time for the real world Holiday season, you'll be able to bring your island along with you. In addition, there'll be 9 new reactions and 6 new hairstyles, both available to be purchased with Nook Miles from the in-game kiosk in the Residential Services building, and finally Item storage is set to be increased from 1,600 to 2,400.

You can check out a video detailing the update below. The Winter Update arrives in Animal Crossing: New Horizons for the Nintendo Switch from this Thursday, November 19.