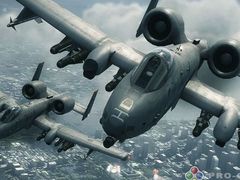 Namco Bandai has released a free and automatic title update for its Xbox 360 aerial combat title Ace Combat 6: Fires of Liberation. Namco notes that the update offers enhancements for the game’s online modes, said to result in a more “seamless and balanced experience”.

– Players will now be penalized for crashing their aircraft, leaving the battlefield and being shot down by opponents in Team Battle and Battle Royale modes

For more on Ace Combat 6 head over to the VideoGamer.com review.