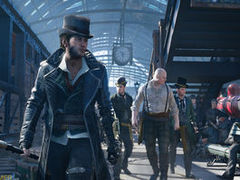 7 things Ubisoft wants you to know about Assassin’s Creed: Syndicate

Assassin’s Creed: Syndicate was announced yesterday for PS4, Xbox One and PC alongside an extended look at the game in its pre-alpha state. But if you’re still not sure about what’s going on, the publisher has also put together a list of seven things you need to know about the game.

1. Twins head to London to take on the Templars

For the first time in Assassin’s Creed you will be able to play as two Assassins – Jacob and Evie Frye. Born in a small town just outside of London, these twin Assassins were raised to follow the Creed. Together the Fryes head to London with the end goal of taking it back from Templar control.

“Jacob and Evie represent a different side of the English persona,” says creative director Marc-Alexis Cote. “Jacob is a charismatic brawler. He’s going to be the leader of London’s criminal underworld. Evie is much stealthier. She’s really, really intelligent and witty. One of the things I really like about our two characters is how they bounce off each other.”

“A lot of the brand has to do with human DNA, seeing into the past through DNA,” adds senior producer Francois Pelland. “Having a brother and sister, twins that share so much of the same DNA, feels like something that plays into the strengths of the franchise.”

2. Take control of the London boroughs

When the twins arrive in London, they are seeing everything for the very first time. They have never been to this city before and must learn all of its secrets alongside the player.

“Because the game starts outside London, you reach London on the train with the characters and you see it with them for the first time,” says Lydia Andrew, audio director. “So that is a nice moment of revelation and kind of seeing the city through their eyes as well. It allows us then narratively to grow their experiences, grow their relationship. They discover the city and at the same time the player is doing all those things, too. They’re not starting from the point of view of being locals or experts.”

“When Jacob and Evie arrive in London, the Templars are winning,” adds Pelland. “They control all the key aspects of London. You have to remember back then London was the biggest center of humanity, with a quarter of the world’s population living there, and the Templars were on top of every part of that city.”

So in order to remove the Templars from power, the twins will need to make their way through each of the unique boroughs of London, winning over the locals and turning them to their cause.

On their journey to wrestle control from the Templars, the twins will unite the street gangs of London under a single banner. The Rooks will be the Fryes’ ears, eyes and blades in the deadly underworld.

“The criminal underworld is being controlled by the Templars,” explains Cote. “That’s how they maintain their control on the city. So Jacob and Evie will call the streets their home and they will rise up and take this criminal underground and unite it under the syndicate of the Assassins. That’s how they’ll take control away from the Templars and give the city back to its people.”

“Upon arriving in London, Jacob and Evie soon take the side of the impoverished majority, though not necessarily for the same reasons,” says Roy. “Evie is much more idealistic and closer to the Creed, and Jacob perceives the rugged London poor as natural allies to the cause.”

In the world of organized crime, it’s smarter to hide your advantage until the moment of attack. Combat is more about getting in close and fighting dirty. In order to support this brutal new style, the Assassins will need some more clever weapons. Weapons like the brutish brass knuckles and the compact revolver, or the gentleman’s cane sword and the exotic kukri knife.

Carriages fill the streets, which in turn need to be made much wider to support the new traffic flow. The buildings are taller than ever and dense crowds pack the sidewalks. You’ll need some help getting around the city. That’s where the introduction of the rope launcher comes in. A new addition to the Assassin gauntlet, the rope launcher will propel you to new heights at a faster pace or even let you create a zipline between buildings and avoid the streets altogether.

6. Hitch a ride on a horse and carriage

Any carriage you see on the busy streets of London can be yours. You can knock someone out of the driver’s seat or hide in the actual carriage itself to escape from your pursuers. Your enemies will be able board your ride and rip you right out of your seat for a brawl on the roof of the carriage, and any other carriages passing by.

Players will also have access to trains, providing a new playground for the Assassins. You may find yourself racing down the length of London’s many trains as you take on your enemies.

Assassin’s Creed Syndicate moves away from the hard snap cover function of Unity in favour of a more modern, softer snap to give the players a more natural transition from stealth to navigation.

The throwing knife can now also be used to create distractions and draw your enemy’s attention away from an area.

When the time comes to hop out of stealth and engage the enemies en masse, you’ll find combat is much faster-paced than ever before. Latency has been cut in half and multiple enemies will attack all at once.

Assassin’s Creed: Syndicate launches on October 23 on PS4 and Xbox One, with the PC version also due to arrive some time in autumn.