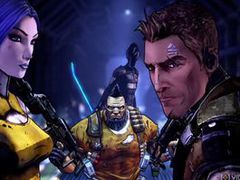 2K is re-releasing Borderlands: The Handsome Collection with a remote-controlled gentleman Claptrap

2K has announced Borderlands: The Handsome Collection Gentleman Claptrap-in-a-Box Edition, a re-release of March’s compilation heading to PS4 and Xbox One later this month that includes a remote-controlled Gentleman Claptrap.

The pack appears to be identical to The Handsome Collection’s earlier Claptrap-in-a-Box Edition, but with a “dapper” Gentleman unit thrown in instead, and outfitted with a tuxedo, moustache, top hat and monocle.

You can see what it looks like in the image below.

The Claptrap can be controlled remotely with a joystick or via the Claptrap mobile app, and features a range of phrases, a microphone and a camera that lets players beam video live to their smartphone.

The pack will be available exclusively from GameStop from November 27 for £269.99.