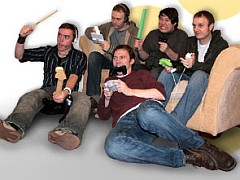 I’m pretty open minded about most things, especially video games, and will defend the industry against anyone who tries to cast it in a bad light, but some parts of Dante’s Inferno made me squirm slightly. At one point a giant, mostly naked woman is on view, her breasts taking up most of the screen. She proceeds to produce enemies from her nipples, accompanied by a nasty puss-like substance. I have to admit that I paused the game while we had visitors in the office, partly to avoid any potential embarrassment should one have taken an interest in the game. Dante’s Inferno is good fun, but I don’t want to think about what my non-gaming friends would make of it.

In preparation for my visit to Stamford Bridge – the home of the this season’s Premier League champions (the mighty Chelsea Football Club, of course) – to see what EA’s got up its sleeve for the FIFA franchise (some of it’s under embargo – watch this space!) I invited my brother round for a mammoth FIFA 10 game session. In my review of the game, I said it was “maybe, the best football game ever created”. Well, I’ve changed my mind. It is the best football game ever created. It’s better than Sensible Soccer (come on, take those rose-tinted spectacles off), better than International Superstar Soccer (remember that?) and better than the best PES. It’s all about the football, and FIFA 10’s football moves, 99 per cent of the time, like a football should. Sure, the game’s got problems (and the upcoming FIFA World Cup game will fix many of them) but there is no better virtual game of football available. Perhaps it should have got a 10 after all.

OK, so I’ve not actually played anything this week outside of FM Live. I’d usually just give a brief update on any progress with the Juicy Danglers, but the truth is nothing of any note has happened. It’s been business as usual, with a few new signings (attacking fullbacks and a skilful forward) helping to strengthen an already championship winning team. The anticipated 1.4 update is scheduled to roll-out on Monday so there should be plenty to discuss this time next week.