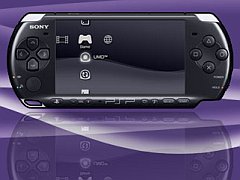 IT’S CHRISTMAS!!! And you know what that means don’t you? It’s time to whip out your wallet and hand over your hard-earned cash for some seriously good games. In this special series of VideoGamer.com Top 10s, we list the best exclusive games for each of the seven major platforms, and tell you why they’re so ruddy brilliant. We start our exciting adventure with Sony’s flashy PSP. Some say it hasn’t got any great games. Read on to find out why the doubters are wrong.

Pursuit Force Extreme Justice rekindles memories of classic arcade racer Chase H.Q.. You speed after bad boy vehicles and attempt to bring crooks to book with well aimed rams and handgun fire. But there’s so much more to it than that. As you put your foot down and edge closer to your quarry you can fling yourself from your car onto the target vehicle, landing on the bonnet, the roof or clinging on to the back like Marty McFly on steroids. From there you can pump lead into the driver and his cronies, pressing square to get behind cover when needed. It’s a thrilling experience, one that doesn’t get old no matter how many times you do it. And it’s all impressively presented on the PSP’s cinematic screen. An underrated, adrenaline-pumping gem.

What do you mean you’ve never heard of Patapon 2? It’s the sequel to Patapon! Yes, Patapon – that game where you lead a tribe of warriors into battle by hammering out drum rhythms on your PSP. After you get used to the weirdness of this command system, there’s every chance that you’ll fall in love with your little brood of silhouette-like fighters. Patapon 2 didn’t really add an awful lot to the original’s mix of real-time strategy and rhythm-based action, but it’s enough of an upgrade for it to get the nod here. Still, the bottom line is that both games are top class purchases for your PSP.

“It’s just a little crush / not like I faint, every time we touch”, sang Jennifer Paige. Happily, she was telling the truth: you won’t faint if you pick up your PSP to play Crush, but you might feel a kind of warm fuzziness in your belly. The PSP has a history of attracting unusual and addictive puzzle games, and this is one of the very best. Your aim is to help a depressed insomniac by exploring his repressed memories, collecting his lost marbles; levels are initially made up of lots of 3D platforms, but by tapping the left shoulder button you can “crush” the entire stage down to a 2D perspective – opening up new paths for you to explore. It’s a decidedly odd concept, but one that results in a genuinely original experience.

Arctic Edge shows just what’s possible on the PSP. It retains the spirit of the PS3 version while offering something unique. The Arctic setting is fantastic, making for some superb track design and eye-popping visuals. It’s not without problems. The Festival mode, for example, is sterile, and it might be too tough for some. But with loads to do, great multiplayer and stunning vistas, Arctic Edge easily skids into place alongside the PSP’s best.

Thanks to its work on the Syphon Filter franchise, Sony Bend has long been known as go-to guys for a decent third-person shooter. When it was announced that the studio was working on a portable version of Resistance for the PSP, our hopes rose – and thankfully the end product did not disappoint. Aside from the change of perspective, Retribution does a great job of mimicking its PS3 siblings – particularly the ultra-bleak tone of the WWII-with-aliens premise. The eight-player multiplayer offerings work well too – especially Assimilation matches, wherein a group of human soldiers is slowly destroyed as its members are infected and turned into Chimera.

Make no mistake, this is Gran Turismo as you remember it, but on a handheld, and done in a way that betters what most imagined was possible. It looks great, plays superbly and has absolutely tons of content to work through. It’s impossible not to feel more than a little let down by what’s missing, though. A more structured career mode would have been great, online leaderboards and ghosts simply should have been included, and the lack of online play is bitterly disappointing. Still, despite these flaws, GTPSP is the ultimate handheld driving game. Buy it, spend hours earning credits and buying cars, and try to overlook the glaring omissions without shedding a small tear.

All Final Fantasy VII fans must play Crisis Core. So much of it rekindles fond memories of Square’s seminal PlayStation role-playing game that it’s worth forking out your hard-earned cash for the trip down memory lane alone. That’s doing the third-person action game a disservice, though. It’s kick-arse in its own right, and is up there with Chains of Olympus in terms of presentation. The strangely addictive combat, which combines traditional hack and slash with a bonkers slot machine mini-game, is addictive as hell. More than a Final Fantasy game for Final Fantasy fans, Crisis Core is an essential purchase for all PSP owners.

There can be no more potent a video gaming pick me up than the super cute LocoRoco 2. You play the planet. The L and R buttons tilt it left and right; both at the same time bounces it up. It’s up to you to guide the little LocoRoco, tearing them apart with lightning and joining them together with earthquakes, through level after level as they joyously sing utter nonsense. So many PSP games suffer from the console’s lack of dual analogue numbs. LocoRoco 2 embraces it by only using three buttons, and is a testament to clever game design. It’s a simple concept but it never feels boring. If that doesn’t convince you to part with your cash, then the LocoRoco’s cute, nonsensical singing will.

LittleBigPlanet’s PSP incarnation is remarkable because it’s in no way inferior to the PS3 version. You can play it as a solid platformer and ignore the level editor, or you can embrace the level editor and go creation crazy. And get this; you can even share your darlings with the rest of the world. Fancy that. All that’s missing is multiplayer, but, let’s be honest, most didn’t buy the PSP for multiplayer gaming. They bought it for the likes of LittleBigPlanet, a superb splash of innovation that pushes handheld gaming forward. A quintessential Sony game that effortlessly ranks as one of the greatest handheld titles of all time.

By quite a distance, third-person action adventure God of War: Chains of Olympus is the PSP’s best game. It’s surprisingly simple and instantly familiar, but it looks so stunning and plays so smoothly that it feels like a revelation. The graphics really are a joy to behold, and put to shame almost every other game on the system. More than a game for God of War fans, Chains of Olympus is a genuine PSP seller. Brutal, bloody, and brilliant, Kratos and his devastating Blades of Chaos are just at home on the small screen as they are on the big screen. Buy it now.

Check back tomorrow for our run down of the ten greatest Wii-exclusives.