Syphon Filter: the impact after 20 years 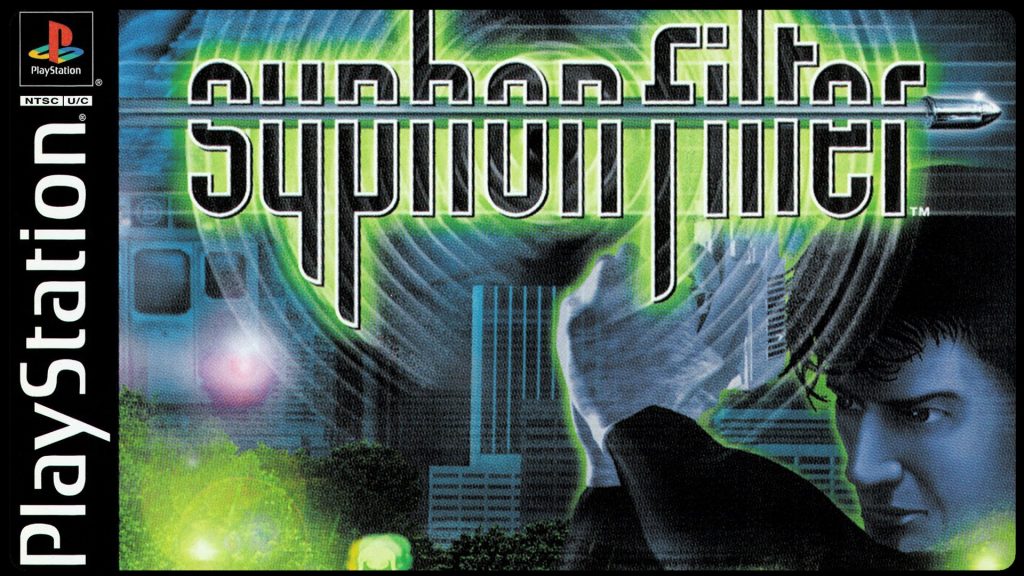 The only thing about Syphon Filter with any ambiguity is its title – which, 20 years after its original release, still sounds like something that you would put in a fish tank. Everything else in the game is as clear and black as night. The name actually refers to a virus that’s been tinkered and tailored by the hands of a terrorist cell. Two elite special operations field agents, Gabe Logan and his partner Lian Xing, are dispatched to scrub the threat clean, like a bloodstain from a starched white shirt.

The opening mission takes place on the streets of Washington D.C., and we’re greeted with a vision that could have been culled from the final act of a Roland Emmerich picture: neatly trimmed roads crammed with smashed cars, curtains of flame drawn across blind alleys, and armed heavies trickling out the woodwork like termites. Short of having the Capitol Building squat on the skyline, there isn't much more you could do to emphasise the threat to national security.

The threat in question is orchestrated by the game’s villain, one Erich Rhoemer – not to be confused with Éric Rohmer, the French filmmaker, who directed Rendezvous in Paris and Love in the Afternoon. Or is it? It strikes me as an oddly specific name for the game’s writer, John Garvin, to have chosen for his villain. Perhaps it’s because Rohmer’s films are filled with talk, with cigarettes and cafes; in short, they are unbelievably French, and, as such, constitute a clear and present danger to the American way of life. And who better to combat such a threat than Gabe Logan, the walking antithesis of talk? 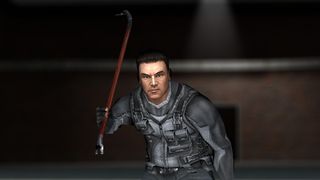 Logan is a man of action, and to play Syphon Filter, even in 2019, is to have your nerves pricked into excitement. The game seems designed with a great white shark in mind: everything streamlined and thrusting forwards. The lock-on is slick and quick to snap between targets; the strafe is a sprint, pinned to the shoulder buttons; and you change weapons in the flip of a single frame. Your taser – which has unlimited range – triggers a close-up, framing your foe convulsing with shock. (In a fiendish touch, if you keep the button pressed, you can jolt them into flames: a moral choice wrapped in a quick mechanic, tempting you to cruelty as you see the smoke begin to rise.)

And look at the way Logan runs, an endless heaving dash that carries him, in that first mission, through the plate glass doors of a hotel. (There’s no option to open the doors normally.) It’s as if Gabe knows his every move might be cut and clipped into a trailer. He never walks, and he never tires; it’s the game that breaks a sweat, the frame rate huffing and puffing at his heels. Garvin revealed, in an interview on the PlayStation Blog, that GoldenEye 007, for the Nintendo 64, was the chief influence on Syphon Filter’s design, imbuing it with breezy thrills and throwaway action.

But Logan could never be Bond. Despite a later mission that boxes him into a tuxedo, he lacks Bond’s leisurely charm, the inclination to walk, not run, and the handsomeness. His face, which looks in the first Syphon Filter like a cricket bat scrawled with felt tip features, would evolve over the years; by the time Syphon Filter: Dark Mirror was released, for the PSP, he came to resemble a late-career Pete Sampras, his face dark and deeply lined from one too many clay court rallies with Rhoemer. 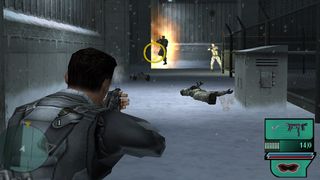 You can trace the contours of Logan’s influence throughout the rest of Garvin’s work. His heroes work best in the shadows, silent silhouettes bent toward espionage; but those shadows are cast by larger, more resplendent heroes. If Logan is a faded facsimile of Bond – or Ethan Hunt – then James Grayson, the protagonist of Resistance: Retribution, is a darker, more troubled understudy to Nathan Hale, who championed the console games. And what is Jason Dante, the villain of Uncharted: Golden Abyss, if not a version of Nathan Drake – lapsing into darkness, his eyes ringed with gloom, his taste for adventure staling into greed.

Looking ahead to Days Gone – the first console game Garvin has written since Syphon Filter: The Omega Strain, on the PlayStation 2 – we have Deacon St. John. It’s difficult to discern too much of Deacon, but what little we have is telling. The backwards-turned cap. The tattoos. The kutte, badged with biker emblems. The mud-splashed hog, rumbling away at the world’s end. He’s a bad-boy Joel, from The Last of Us! The guilt and greying hair replaced with attitude and swagger.

Days Gone will also mark the first time, since Syphon Filter, that Garvin has leant toward the supernatural. His closest brush came with Uncharted, but he swapped that series’ penchant for the fantastical – so often unearthed in the final chapters of its games – for the rational, and the radioactive, its city of gold haunted not by spirits or monsters but by radiation. Straight action-espionage games are hard to come by now. Perhaps this is the lasting impact of Syphon Filter, in 2019, the bullet hole it has left in the landscape of games: where have all the thrillers gone?