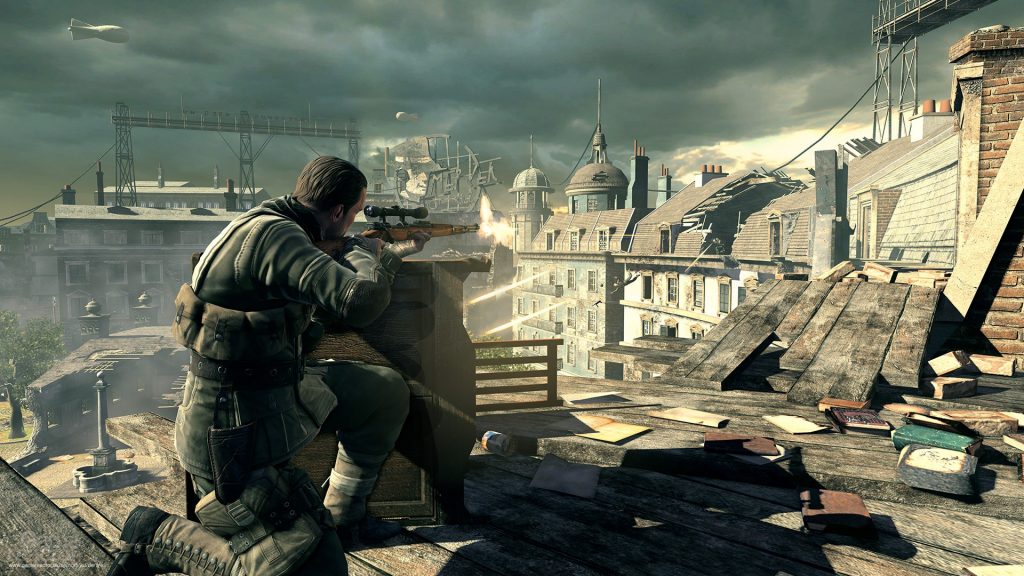 Sniper Elite V2 Remastered, Rebellion, and the joy of B-games

So, I’m walking through Berlin, in 1945, and the place is like a giant broken jaw – buildings like bones and blasted-out windows like missing teeth. It isn’t without a certain visual irony, then, when I shoot a German soldier, 1,034 feet away, that the man’s mouth looks like a bomb has hit it. Doubly so for the slow-motion X-ray effect I’m treated to upon impact: the skull crunched in a spray of red and white rubble. Any floods of sympathy I might feel for the fellow are to be beaten back by a dam of just desserts. He was a Nazi, afterall.

It goes without saying that I’ve been playing Sniper Elite; is there any other series set in World War II that’s made such theatre of the European theatre? Specifically, I’ve been playing Sniper Elite V2 Remastered, which is out on May 14. I shan’t pass any conclusive judgement, lest the rifle scopes undoubtedly trained on my head, loaded with embargo-stamped bullets, fire at me. Suffice to say, it glosses the game first released in 2012 with a sheen of post-processing effects, revamped lighting, and freshly laid textures. But by far its most crucial update is, to quote the game’s website, ‘Improved ball busting X-ray kill camera detail,’ which is not something that one would hear on the History channel, even as it made the jump to HD.

Despite the sharpened visuals, the chassis of Sniper Elite V2, the Asura Engine, made by developer Rebellion, still creaks along with a rough and rigid feel. Like in last year’s Strange Brigade, characters move with clunky animations, boxed in by environments and twitching round scenery. As I judder over piles of pavement in the Schöneberg Convoy level and fasten satchel charges to the rusted innards of the Mittelwerk Facility – the better to blow up a stash of V2 rockets – I wonder, what is it about this game that demands such smirking fondness? And then it hits me like a shot: it’s a true B game. The sort that feels designed, appropriately enough, with a narrow scope, and one which scraps polish, but not style, for substance. 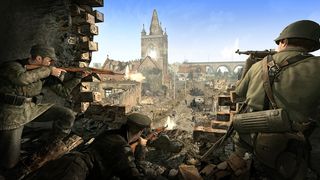 The B movie has its origins in the Golden Age of Hollywood, during which time a newly minted film required a running mate for the showing of a double feature. These would be cheaply made, but there’s nothing like constraint to strop the creative imagination; and to recoup their money they jumped on genre, exploiting popular taste. Films like Cat People and I Walked with a Zombie prowled the alleys of the collective moviegoing subconscious, purring with promises of sex and violence. As times wore on and the definition of the B movie dissolved, it came to mean those films that roamed the low budget underbelly of the big releases. Night of The Living Dead and The Texas Chain Saw Massacre made their marks from the shadows. While a film like Piranha, its waters infested with bare chests and sex, swam in the slipstream of giants like Jaws.

Rather like the hero of Sniper Elite. Well, despite the ball busting X-ray camera, there’s certainly no sex in Sniper Elite V2 Remastered. There’s buckets of sadism, though. Back in 2005, when Sniper Elite was released, it didn’t have the gouts of gratuitous violence it has now. What it had instead were ballistics in the more traditional, less testicular sense: artful details like bullet drop, the player’s breathing, and the strength of the wind all factored in to the fighting. Sniper Elite chewed over the specifics of bloodshed in a time when the big budget games gulped down ever-larger mouthfuls of war. Battlefield 2, Call of Duty 2, and a brace of Brothers in Arms games – Road to Hill 30 and its sequel, Earned in Blood – all came out the same year. None of them, now, have the cult power that Sniper Elite has to conjure instant recognition with a simple spray of blood.

Look no further than a panel at this year’s EGX Rezzed entitled ‘Nutshots & Nazis: The Sniper Elite Story,’ which surely marks the first time exploding genitalia was deemed a story. Sniper Elite V2 was the first in the series to feature the X-ray kill cams; a year before its release, in 2011, Mortal Kombat came out, featuring similar cross sections of battered bodies. It’s a curious connection – like following unspooled entrails – and one that has its roots in B-game status. Ed Boon and John Tobias were charged, in 1991, by the high-ups at Midway, with making a ‘combat game for release within a year.’ The game in its crosshairs? Street Fighter II: The World Warrior. 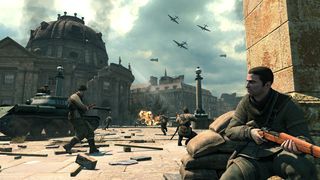 How best to make a mark against a game so huge? Extreme violence, it seemed, was the answer: the route to, if not fame, then infamy. Just as Mortal Kombat was the series that let you rip spines out of their rightful place, Sniper Elite became the series that lets you shoot Nazi privates. Rebellion has always revelled in these pulpy charms. Take Rogue Trooper, for instance, whose hero’s skin is the colour of washing detergent, and whose Nazi-esque villains, the comically blonde, crew-cutted Norts, march across alien worlds in rubbery gas masks. It’s pulled from the bizarro pages of the sci-fi comic (which Rebellion also publishes), and when it was released, in 2006, it hovered in the outer orbit of games like Gears of War, Resistance: Fall of Man, and Prey.

Just last week, I wrote about Days Gone, a game by a talented B game studio, that scoots along in the lane next to The Last of Us and Horizon Zero Dawn. For me, its cheap charms live in this same B-game heritage. It won me over with its powersliding motorbikes, its gore, the roughness of its performance, and the texture of its world. If it can’t boast the emotional complexity or the artistry of those other games, it slaps a backwards-facing cap on its hero and gives him a name like Deacon St. John. And it seems to have worked. The game sits currently at the top of the charts. Perhaps its cult appeal, like Sniper Elite, has already set in, buried, like a bullet, in the brain of video game culture.