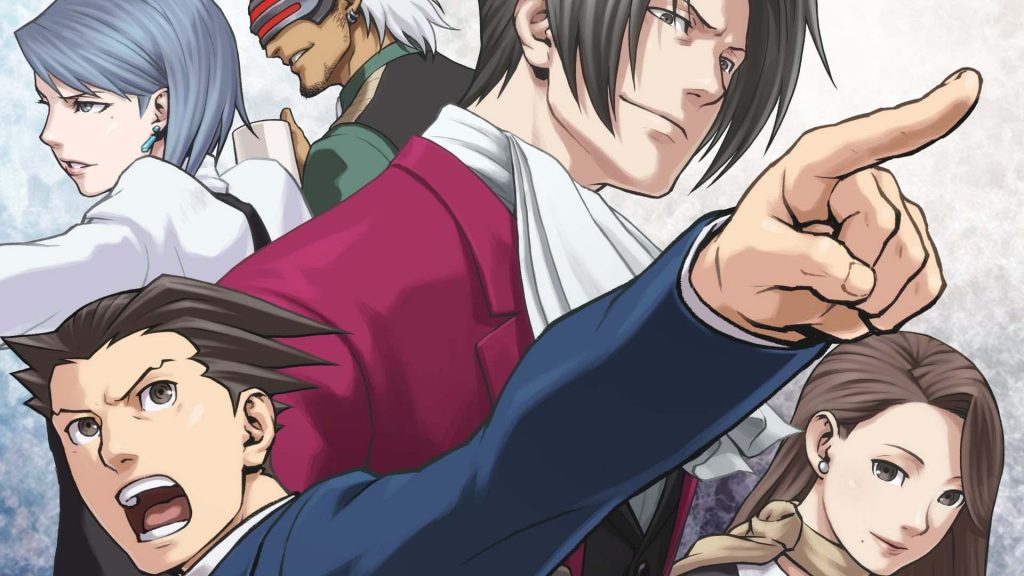 Phoenix Wright: Ace Attorney Trilogy is an escape to the future past

The third case in Phoenix Wright: Ace Attorney begins with an ancient battle – two armoured warriors cross blades in a field before a full moon. The action soon switches to a courtroom, but you can scarcely tell the difference. Such is the swashbuckling feel of the series’ trials, which have the same snap as the Insult Sword Fighting in The Secret of Monkey Island. Evidence is ammunition; every lawerly objection blasts forth like an artillery round; and characters are constantly on the brink of a kabuki outburst.

You can hardly blame the game’s developer, Capcom, for wanting to wring the starch from the collar of the courtroom drama. The Ace Attorney series takes joy in the ornate ceremony of justice, showing its affection by dialling things up to gladiatorial proportions. Even when the first game was ported from the Game Boy Advance to the Nintendo DS, in 2005 – at the height of its hardware gimmickry – the notion of using that nifty stylus to compile case reports, fill out affidavits, and organise your exhibits was a little too real. When it comes to the courthouse in video games, it seems, we can’t handle the truth.

And why would we want to when the result is this bright and buoyant? Phoenix Wright: Ace Attorney Trilogy – which has just come to PS4, Xbox One, Switch, and PC – has the fond feeling of a holiday to it. These games follow the adventures of, believe it or not, Phoenix Wright: a young lawyer who looks as though he styles his hair by hopping straight from the shower to the car and sticking his head out the window on the way to work. The result, swept and streamlined, resembles the plumage of a bird of prey – thus hatching new meaning from the term ‘legal eagle.’ 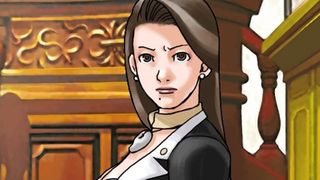 His work is done at the Fey & Co. law offices, under the mentorship of Mia Fey, the firm’s founder. In time, Wright gains an ebullient secretary, called Maya, who happens to be a practicing psychic capable of channeling deceased souls when the occasion calls for it. The first game is set, strangely, in 2016, and the sequels extend onward into the 2020s. Quite why I’m not sure; perhaps it was done to lend the narrative – which arcs across the cases – the powers of premonition, as if it might flesh out a future that seemed plausible when the first game was released, in 2001. Now, three years on, its world is a blend of the cheerful, the dated, and the disturbing.

Early on, Phoenix informs us, via internal monologue, that, ‘two or three years ago,’ a three-day time limit was enforced on all trials. We also learn that the judge, in a further display of tyrannical impatience, penalizes lawyers for raising the wrong points. When I first played the game, on the Nintendo DS, I can only imagine I must have nodded solemnly at these outrageous details – grimly certain, in my early teens, that society was heading for this crammed and fascistic state of affairs.

Not that the mood of these games contain the slightest hint of the dystopic or the glum; far from it, it overflows with bonhomie, covering the chills with cheer. One bolshy suspect tells Phoenix he has the courts and the police in his pocket; he punches the hero, just to prove his power, before calling in the police himself and having Phoenix arrested. Such a dark figure is best sugarcoated in the most literal way possible: by giving him an icing-pink suit that looks more cake than couture. What’s more is that Phoenix still doubts the darkness of his own world; ‘I wonder… is that kind of control really possible?’ he says of this candy-coloured villain. 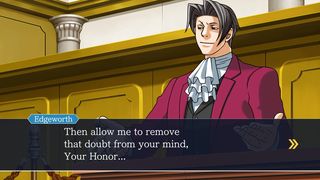 You wonder how that sort of naivety could flower in a world so liable to trample it. Yet flower it does, and it isn’t just Phoenix either; all the defendants act as if their lives aren't on the line (the cases are all murder) so much as they're being given a chance to perform for the camera. The exaggerated anime style has them mutating with emotional metaphor: watch them grow moon-size eyes, sprout fangs in anger, or sweat like sprinklers as you pry and pressure them to get to the truth. These are games that take the word ‘expressionism’ at face value.

Meanwhile, the stink of corruption hangs thick in the air. One murder takes place opposite the Gatewater Hotel, and what, might you guess, happens there? A wiretap, of course, and with it a hint of scandalous history. Wright’s rival in court is the foppish prosecutor Miles Edgeworth, who dresses as if he moonlights as an Austin Powers impersonator. About Edgeworth Phoenix tells us, ‘There are rumors of back-alley deals and forged evidence.’ He’ll do anything, apparently, to get a guilty verdict. The best thing about grilling a witness is seeing Edgeworth squirm and clutch his chest, as though you had just cracked a rifleshot at him. 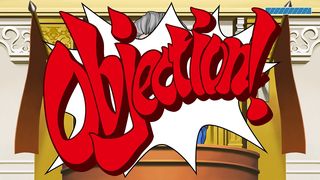 It’s that glittering silliness that makes these games a must; they seem a window to another time – as if present and past were the two screens of a Nintendo DS and you’d just clicked them into alignment. Indeed, as handsome a prospect as this trilogy is, I’d recommend wiping the dust from your DS, if you still have one, and getting a copy on there instead (the trilogy is on 3DS). There’s something about the syrupy analogue stick that doesn’t stack up to a stylus. And these environments, spacious and sparse, don’t suit a TV screen; they need the grain of a dot matrix, or else they seem synthetic. And the best way to close a case was always to clap the DS shut – to be dipped in and out of in accordance with your appetite for melodrama.

Still, if you don’t have an old DS then you could do a lot worse than this trilogy (the Switch version surely appeals the most). Playing these games again now, in this pustule of a present tense that we find ourselves inhabiting, is a bittersweet relief. What you wouldn’t give to see the House of Commons bound by a three-day rule and penalized for rambling, or to see the seemingly impregnable president sweat on the stand. I remember thinking, when the Cambridge Analytica scandal broke, ‘I wonder… is that kind of control really possible?’ Over the last few days I’ve realised exactly what Phoenix would make of our 2019. One word: Objection!