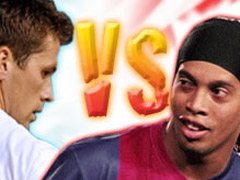 Gamers have been arguing over PES and FIFA across playgrounds, parks and pubs throughout the UK for almost as long as we can remember. FIFA is for less hardcore gamers, it has all the licenses, the better commentary, the gorgeous graphics and the arcadey gameplay. PES, on the other hand, is a true simulation, focusing on slow, considered gameplay over presentation. Now, in the first of a new exclusive regular series, we pit the two footballing heavyweights against each other in VideoGamer.com’s VS.

FIFA 08: EA Sports has always done a great job of making its FIFA games look great, and the 08 edition is no different. Put simply, the game looks stunning, with glorious HD graphics, superb stadiums and excellent player animation. It looks so good that you would be forgiven for thinking you were watching a Premiership clash on Sky Sports. If we have one gripe it’s that close up the players look fat, and their faces can look a bit odd. But that’s not enough to prevent FIFA 08 being the best looking football game and arguably the best looking sports game of all time.

PES 2008: PES has always been a bit light on the looks front, and PES 2008 does nothing to address this common complaint. The presentation is average, the menus a baffling mess and the match view a mediocre last-gen effort. But this is nothing new. What is new is that there is more slowdown in PES 2008 than in any previous version of the game – on the PS3. The replays are so bad it’s almost impossible to see anything. While the Xbox 360 version plays a perfectly smooth game, the PS3 version suffers terribly. Penalties are in slo-mo and there’s regular tearing. The game’s legendary Japanese producer has said his team is not built for multi-platform development, which may go some way to explaining the problems. But that won’t do anything to make gamers who have forked out their hard-earned cash for what they thought was the first true next-gen PlayStation PES feel any better.

VERDICT: FIFA slides in on PES, wins the ball clean, races down the other end of the pitch, fires a 30-yard screamer into the top corner then runs back to rub it in. No contest.

FIFA 08: Again, another area where FIFA has traditionally excelled. Once again EA has jam packed the game full of tracks from actual artists. The commentary, from Sky Sports stalwarts Martin Tyler and Andy Gray, is excellent, despite the odd annoying repetitive statement. The ball sounds suitably realistic, whether it’s met with a Rooney thunderbolt or a subtle Fabregas stroke, and the crowd pump out real, recognisable chants. Put simply, FIFA 08 sounds like the real game.

PES 2008: Commentary, this time provided by the BBC’s Jon Champion and Mark Lawrenson, is the best ever for a PES game, and more up with play than ever before. However, the music is still terrible, with some frankly embarrassing tracks to listen to while you navigate the menus. In a match, the crowds sound OK, but there’s no real world chants. And there’s a curious “ooomph” sound effect when two players clash. Overall, better commentary, but everything else is still poor.

VERDICT: PES 2008 saves a penalty from FIFA 08, but EA Sport’s player tucks in the rebound anyway.

FIFA 08: FIFA has always been considered more of an arcade game, with an emphasis on fast play, silky skills and spectacular goals. This effort however, is a much slower affair, with nice, fluid gameplay that, while still providing a platform for some ridiculous skills and jaw-dropping goals, is simply really good fun. We’d say FIFA 08 has the best gameplay of any FIFA game in recent memory, and perhaps even ever. EA Sports has obviously tried to emulate Konami’s PES gameplay in recent years, and FIFA 08 is as good as they’ve managed to get it.

PES 2008: The new gameplay tweaks have split PES’s loyal fanbase right down the middle. It’s certainly a faster game, and your ability to go past players is much improved. Indeed dribbling feels more arcadey than any PES has ever done, which is ironic given FIFA’s recent change of direction. For me though, I think PES 2008’s gameplay has hit a sweet spot. Yes, the goalkeepers spill shots way too easily, and there can be comical moments where it all feels a bit like a goal-line scramble in a Conference match, but it’s still fantastic fun.

VERDICT: PES 2008 displays some silky Ronaldinho-esque skills it has previously kept hidden, giving FIFA the run around and a taste of its own medicine. The gap, however, is closer than ever.

FIFA 08: EA’s latest provides a solid, enjoyable multiplayer experience, which is as good offline as it is online. That you can now play a five versus five match online is even better. A nice touch is online leagues, which collate all the results for, say, Chelsea, and work out where they place as an overall. Technically sound, you won’t be disappointed when you get your mates around for a few beers, pizza, and the odd multiplayer match. A sterling effort from EA Sports.

PES 2008: Let’s get the bad things out of the way first. Online PES 2008 is a laggy mess and, despite a recent patch for the Xbox 360 and PS3 versions, is full of ball warping and player teleportation. It’s actually a worse online experience than in PES 6, which seems amazing to us. However, on 360, PES 2008 on a single console still provides one of the best multiplayer experiences gaming has to offer, purely because the machine provides a smooth match. Konami has said it is still working on further updates which will hopefully improve the online play, and offline PS3 play. We can only hope.

VERDICT: PES 2008 takes a woeful free kick which hits the FIFA 08 wall, wrong-foots the keeper and trickles into the net. A terrible online effort from Konami, but still some of the best multiplayer gaming to be had with your mates in front of the big TV.

This of course comes down to personal taste, as does everything. For us, PES 2008 beats FIFA 08, but the final score is closer than ever. We’re thinking a lucky 2-1 victory. This was no impressive performance. But, as they say, the mark of a champion is being able to win while not playing particularly well. The pressure is now on for Konami to drastically improve matters for the next game, and compete with a FIFA that will no doubt be even better.

The acclaimed football series returns for another season.

The acclaimed football series returns for another season.