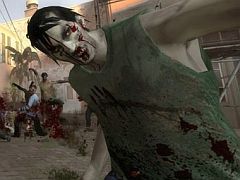 Left 4 Dead 2 is out in a few short weeks, but to get everyone suitably excited Valve released a very generously sized demo for PC and Xbox 360 owners. If you haven’t had a chance to download and play it yet, don’t worry; we’ve put together five extensive HD 720p gameplay clips showing the Xbox 360 version in action, meaning you can feel like you’re playing it, even if you’re not.

Stick close to your group, otherwise you might find yourself in the path of a Charger.

Like shooting fish in a barrel, except the fish are zombies, and there’s no barrel.

Guns are cool and all, but nothing says zombie slaying like a blood soaked frying pan.

While rock stars are smashing guitars on stage, we’re using them to smash zombie faces.