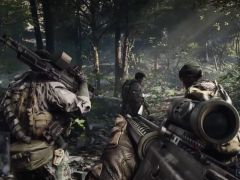 Battlefield 4: Which is better – Xbox One or PS4?

One of my main criticisms of Battlefield 4’s campaign was that it did little to make the player feel as if they were a part of a much bigger war. But in reality, they are: simply by coming along for the ride, every Battlefield 4 player is a combatant in a far more significant battle. And with the console war heating up as we edge closer to the next-gen launch, DICE’s shooter may end up being a key factor in the war between Microsoft and Sony, with the PlayStation 4 version displaying a clear advantage over the Xbox One.

Battlefield 4 on PlayStation 4 looks stunning, with DICE clearly utilising the console’s additional firepower to yield a superior image quality on Sony’s machine. Images are pin-sharp, appearing to run at a native 1080p and fluid 60 frames per second. But while the Xbox One version effortlessly maintains the same frame-rate, the image quality is perceptibly worse, sporting a softer, jaggier look that carries all the hallmarks of a game upscaling from a sub full-HD resolution. My suspicion is that the Xbox One version is rendering natively at 720p before upscaling to 1920×1080, although DICE opted not to confirm numbers when confronted about the resolutions of the two next-gen versions directly.

To some people, the difference will be negligible. Battlefield 4 on Xbox One is still visually astounding: the lighting and particle effects – particularly during the single-player campaign – are remarkable, and the fact that DICE manages to maintain a fluid 60FPS without a hitch is truly praiseworthy. Both versions offer a noticeable step up over the current-generation far beyond just the frame-rate, and while there are subtle differences in quality between the top-end PC version and next-gen console, few PS4 players will likely complain about the magnificent visual experience on offer here.

But to those that do care (presumably those of you reading this), the difference in image quality between the two consoles is clearly visible. In the Xbox One’s case – a hugely important launch title for Microsoft’s machine- it makes the step up to next-gen that little less spectacular, signifying a trait players have been used to for years on current-gen consoles and an obvious step down from PC.

As the video below shows, the visual effects between both Xbox One and PlayStation 4 are largely on par with one another, making the trade-off in resolution the only real barrier between each console. [Please note that the PS4 & Xbox One segments featured below were shot at 30FPS 720p.]

The differences between the two versions will come as great concern to Microsoft. Just as it appears to be regaining traction from its fumbling Xbox One campaign, the revelation that at least one of next-gen’s major launch titles is noticeably weaker on its console will be enough to threaten to send the platform holder back to square one. It’s difficult to tell how big a problem it may end up being until we’ve compared the complete multiplatform launch line-up it, but if the trend continues with further releases (as last week’s Call of Duty: Ghosts rumour suggests it may well do) even players heavily invested in the Xbox platform could be prompted to starting look elsewhere.

It may just be teething problems, of course, and as developers grow accustomed to working with Xbox One, issues related to native resolution may soon become a thing of the past. But that goes both ways. With the PS4 off to a stronger start, the divide between the two consoles may remain a constant as developers look to push that GDDR5 RAM and impressive GPU in ways they simply can’t on Microsoft’s console.

And if such issues persist, with the alignment in policies making the technical prowess that much more important, the war may have already been won before it’s even gotten underway.