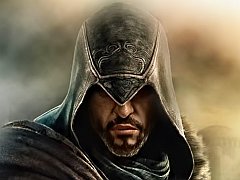 Assassin’s Creed: The story so far

With multiple time-lines, several assassins, historical figure-heads, Templars, terrorist organisations, gods, pieces of fruit and a smoking-hot blonde, there’s a lot to keep track of in the Assassin’s Creed series. To bring you up to speed before the next game, Assassin’s Creed Revelations, we’ve put together this handy catch-up.

It should go without saying, but the following article is riddled with spoilers; it’s been written as a recap, after all. So make sure you’ve played up until the end of Brotherhood before reading any further…

The Assassin’s Creed series plays out across three timelines: the 12th century, the 15th century, and 2012. This follows the lives of AltaÃ¯r, Ezio and Desmond respectively. Things quickly get confusing, so pay attention…

It all kicks off in 2012. A chap called Desmond is kidnapped and taken to Abstergo Industries, where researchers – lead by Warren Vidic – are working on something known as the Animus project. The Animus is able to pull out the memories of its user’s ancestry, allowing him to replay those memories as if he were there himself.

Desmond was kidnapped because of one ancestor in particular: AltaÃ¯r, who was an assassin during the Third Crusade of the Holy Land. The first memory Desmond experiences is that of AltaÃ¯r failing to assassinate the Grand Master of The Templar Knights, Robert de Sable, and recover the order’s treasure. Due to this, AltaÃ¯r is stripped of his Master Assassin rank.

Over the course of his time in the 12th Century, Desmond discovers an ancient battle between two clandestine organizations: the Assassins and the Templars, who both seek an artefact with the power to reshape the entire world.

Between sessions in the Animus Desmond meets Lucy Stillman, who appears to be working for Vidic. From Lucy Desmond learns that Abstergo Industries is run by modern-day Templars, who are seeking the locations of several artefacts that they can use to continue to Templars’ goals in present day. Desmond – through AltaÃ¯r – is the key to the location of where that artefact might be hidden.

So, to cut a long story short, AltaÃ¯r goes off and kills nine dudes (resulting in one of the most repetitive gaming experiences in recent memory), restores peace to a land terrorised by the Third Crusade, and secures the fabled artefact: known as a Piece of Eden. With AltaÃ¯r’s memory complete, Desmond awakes in 2012 discover that Abstergo Industries is already sending out recovery teams to those locations hoping to find the artefact. As he no longer serves any purpose to Abstergo, Desmond is ordered to be killed. It transpires, however, that Lucy is a mole for the Assassins, and helps Desmond to escape.

In the conclusion of the game, Desmond – having become ‘synchronized’ with AltaÃ¯r – is able to use the eagle vision, a power that he has no reason to be using outside of the Animus. This is a result of the ‘bleeding effect’, which is where DNA gets confused between generations. This bleeding effect is crucial to Desmond’s future.

Assassin’s Creed 2 picks up exactly where the first game left off: Desmond escapes Abstergo Industries with Lucy, who leads him to a safe house. Lucy promises to ‘train’ Desmond in the ways of the assassin, using the Animus 2.0 to sync his abilities with those of another ancestor. This ancestor is Ezio Auditore da Firenze, an assassin who lived during the Italian Renaissance in the 15th Century.

At the start of the game, we find Ezio’s family caught up political matters, and his father and brothers are seized and hung. Retrieving his father’s equipment, Ezio flees the city with his mother and sisters to live at his uncle’s villa. An Assassin in the making, Ezio seeks revenge on the murderers of his family.

With the help of his uncle, NiccolÃ² Machiavelli and Leonardo da Vinci, Ezio assassinates the political figures at the heart of the conspiracy, eventually leading him to mastermind of the plot: the Spaniard, Rodrigo Borgia.

Led to the Vatican, Ezio finds Borgia in possession of the Apple – the same Piece of Eden that AltaÃ¯r had recovered in the first game – and learns that Borgia believes himself to be “The Prophet” that will lead the Templars to a fabled “Vault”. Ezio is able to recover the Apple, but Borgia flees before he can be killed.

Catching up with Borgia in Vatican City several years later, Ezio plans to finally exact his revenge. When the moment comes, however, he can’t bring himself to do it: killing Borgia will not bring back his father or brothers. He uses the Apple to open an entrance to the Vault – and then things start to get interesting.

Ezio meets an apparition – a divine entity who calls herself Minerva. This apparition isn’t interested in Ezio, however, and speaks through him, relaying a warning to Desmond. Before getting to what that warning is, however, let’s back up a minute.

Who is this Minerva? Not a god, she reveals – just a more advanced race that came before humans. These beings created humans by using the piece of Eden, in fact – so they’re gods of sorts. But here’s the thing: the human race would only obey these ‘gods’ with the piece of Eden in their possession.

Still with me? Good, because another variable is about to enter the equation.

Over the course of the first two games, Desmond learns of Subject 16: another man held captive by Abstergo, who has used the Animus. Subject 16 knows a lot, and has left a message for Desmond in the Animus. Deciphering glyphs hidden around Italy, a video of ‘The Truth‘ is revealed. The video shows a couple being chased through a futuristic looking environment. At the end, we learn that the man is called Adam, and the woman, Eve. Here’s the crucial bit: Eve has the apple. She stole it.

So, having stolen the apple which gives these beings their power, the humans rebel and wage war with the gods, eventually driving them from Earth. After a cataclysmic event, God and humans are united once more, but the gods are left weakened and in short numbers after the war. The gods eventually die out. All that is left of them is a date: 21.12.12 – the date this cataclysmic event is said to return; a date that the Mayans have predicted for years.

Yeah. So it all gets a bit confusing by this point, and you can only speculate on a few things. Minerva leaves a message for future generations in a vault in Italy. Trouble is, Ezio gets there too early – but the gods foresaw this, and use Ezio as a channel to Desmond. “It’s up to you now!” she tells Desmond. This doesn’t mean much to either Ezio or Desmond, and before Ezio can probe Minerva with more questions, Desmond is pulled out of the Animus.

The safehouse, it turns out, isn’t so safe. After being discovered by Abstergo, it’s time to pack up and find somewhere new. As they flee, Lucy reveals that they’ve discovered new weaknesses in the Earth’s magnetic field, and that if a solar flare were to strike this weakness, the effects would cause a similar level of global destruction as described by Minerva – the end of the world, perhaps. Desmond agrees to help stop this by re-entering the Animus.

In Brotherhood, we learn what happens to Ezio after leaving the vault. Although confused by his conversation with Minerva, Ezio has more immediate concerns: his villa has been overrun by Templars and his family are in danger. The villa is besieged by Cesare Borgia, son of Rodrigo – now Pope Alexander VI – who kills Ezio’s uncle, Mario and makes off with the Apple of Eden. Ezio and the remnants of his family escape to Rome, where the remainder of Brotherhood takes place. Ezio promises to rally together a brotherhood of assassins, and end the Borgia’s regime for once and all.

Over the next four years, Ezio burns down all the Borgia towers in Rome, crippling the influence the family has over the city. Meanwhile, Cesare – a man campaigning to be King of Italy, a man desperate for power – asks his father for the Apple. Taken back by his son’s unquenchable thirst for power, Rodrigo attempts to poison his son, but Cesare is able to turn the tables on his father, who ends up dead instead.

Lurking in the shadows, Ezio sees the entirety of this, learning the location of the Apple in the process. Recovering it from St. Peter’s Basilica, Ezio then uses the Apple (which holds great power) to overwhelm Cesare’s forces, thwarting his campaign for the throne, and decimating the respect of all his supporters. Cesare is soon arrested by Pope Julius II’s Papal Army, and forced to leave Rome.

Years later, with his family safe and Rome left in peace, Ezio uses the Apple one more time to check on Cesare. It’s a good job too, because he had escaped prison and laid siege to a small city in Navarre, Spain. Finding him on the crumbling battlements of an old castle, Ezio does battle with Cesare for the last time. Left in a vulnerable position, Cesare claims that he can’t be killed by the hand of a man, so Ezio drops him off the battlement and let’s fate do it’s job. Ezio has onbe last task: hiding the Apple somewhere it’ll be safe for a very long time; underneath Santa Maria in Aracoeli.

Desmond’s DNA ‘activates’ the apple, and something possesses him. With an invisible puppeteer controlling his body, Desmond plunges a knife into poor Lucy, who is herself paralysed, stuck in some sort of time void.

One of the last things we hear in the game, is Minerva saying “Awaken the sixth!” – but what this might mean is anybody’s guess.