Nubia RedMagic 7 vs 7 Pro – which one should you go for? 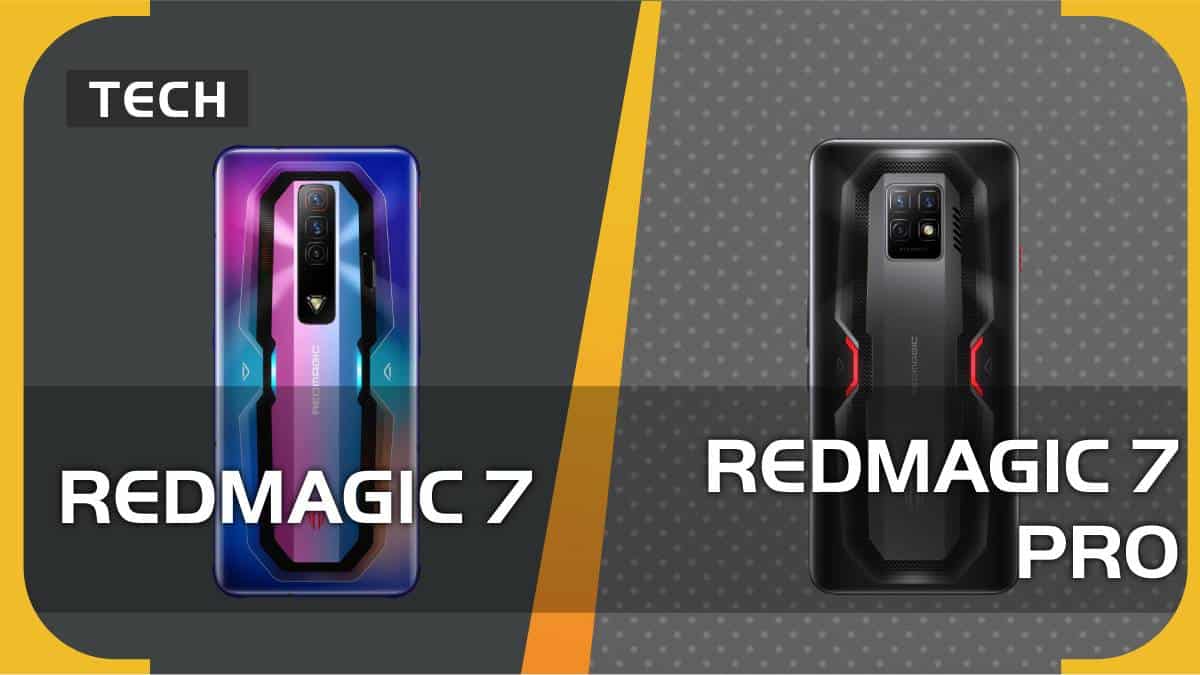 We’re looking into the Nubia RedMagic 7 vs 7 Pro to see which high-end gaming phone is right for you.

Both these phones were released at the same time and both boast some of the best specs on a gaming phone out there. The Nubia RedMagic 7 is easily one of the best gaming phones available, with powerful internal specs, and impressive cooling capabilities.

The RedMagic 7 Pro, similarly excels in this field, and goes further with a longer battery and superior front-facing camera, making it a great alternative to the ASUS ROG Phone 6 Pro.

Unlike what you might expect with Pro ranges, however, comparing these two phones is not simply a balancing act between price and performance. As we will get into more in our full breakdown, the standard RedMagic 7 holds its own in a few key areas.

This means that both these phones are slightly better suited to different needs. To make sure you get the one that makes the most sense for you, we’ll be digging into everything from specs to features to design, as well as giving you all the information you need on overall value for money.

We’ll start by comparing and contrasting the Nubia RedMagic 7 vs 7 Pro in terms of specs. Let’s get started.

Both these phones are certified powerhouses, with some of the most powerful specs available. However, there are important differences between the two, some of them surprising.

Both phones use the same powerful Snapdragon 8 Gen 1 CPU processor, and both have some of the best ventilation systems of any phone out there. This means they can get higher performance from their CPU without having to worry about overheating.

What might come as surprising is that the standard RedMagic 7 actually comes with a higher overall refresh rate at 165Hz, versus the 120Hz for the RedMagic Pro. Considering how geared towards gaming both these phones are, this is a surprising choice. Refresh rate is one of the most important specs for gamers and the 165Hz is noticeably smoother and snappier on the RedMagic 7 compared to the 120Hz on the Pro version, though this is still incredibly high for a phone. The standard RedMagic 7 also has a higher brightness.

The RedMagic 7 Pro hits back with a far higher resolution front camera, a staggering 16MP versus the more standard 8MP for the non-Pro. It also boasts a larger battery and superior energy efficiency meaning you can reliably game on it for longer.

Both these phones have similar features which optimise them for gaming performance.

One of the best examples of this is RedMagic’s palm touch prevention tools. They detect screen contact that is likely to be unintentional and doesn’t register it. This can be pivotal in some mobile games.

The feature is slightly more useful for the RedMagic 7 Pro, which, as we will discuss more, has smaller bezels and therefore is more susceptible to inadvertent touches.

Read more: Are gaming phones worth it?

There’s also a suite of tools for adjusting internal settings. With these, you can change everything from the clock speed of the CPU to the lighting settings in specific games.

One key feature here is actually one that is missing from both phones. That is 8K video stabilisation. While the ability to shoot in 8K that both these phones have is incredibly impressive, due to the lack of built in video stabilisation, the mode is unfortunately hard to use without a tripod or external video editing software.

The look of these phones is, on the whole, similar, which is unsurprising considering they come from the same range and same manufacturer. There are of course some key differences.

We have already discussed the significantly smaller bezels on the RedMagic 7 Pro. In fact, thanks to the selfie camera being under the display, the 7 Pro is virtually bezel-less. Meanwhile, the standard RedMagic 7 has one on the top and bottom of its front display.

Another interesting difference is that the cameras are aligned differently between the models. On the standard RedMagic 7 they are in a line, whilst they appear in a square formation on the Pro. Despite this, the rear cameras themselves are identical between the two models.

As for the overall look, both featured square edges and a tasteful aesthetic, one that stands out from other, non-gaming phones, without being too in your face.

Both phones are available with a wide range of different storage and memory sizes and, as such, a range of prices.

The Pro models are, unsurprisingly, overall more expensive, though not by a huge amount. Comparing the 16GB RAM with 256GB storage version of both models we see a price of $729 for the stand RedMagic 7, and $799 for the RedMagic 7 Pro.

These prices go up and down by similar amounts when you add or remove either RAM or storage.

For the higher price of the Pro, you do get a better front-facing camera, a sleeker look and an improved battery life. However, there are also sacrifices that come with it, including a lower refresh rate and a dimmer display.

On the whole, both offer a great amount of bang for your buck, packing in high spec across the board for a price that undercuts much of the more mainstream competition.

Which one should you go for?

Overall both of these are exceptional gaming phones. Thanks to their incredibly high specs as well as a range of features which further optimise them for gaming. With this in mind, which exact one to go for depends on preference.

If you are the most hardcore of gamers it makes more sense, perhaps surprisingly, to go for the standard RedMagic 7, thanks to its higher refresh rate and brightness.

Those more interested in having a sleeker device which is still very capable of handling high end gaming should turn to the RedMagic 7 Pro, with its virtually bezel-less display, high-quality selfie camera and huge battery.

Is the RedMagic 7 waterproof?

No – the RedMagic 7 features no waterproofing.

Is the RedMagic 7 high-end?

Yes – all the phones in the RedMagic 7 range are incredibly high end, boasting some of the most impressive specs available on any smartphone.