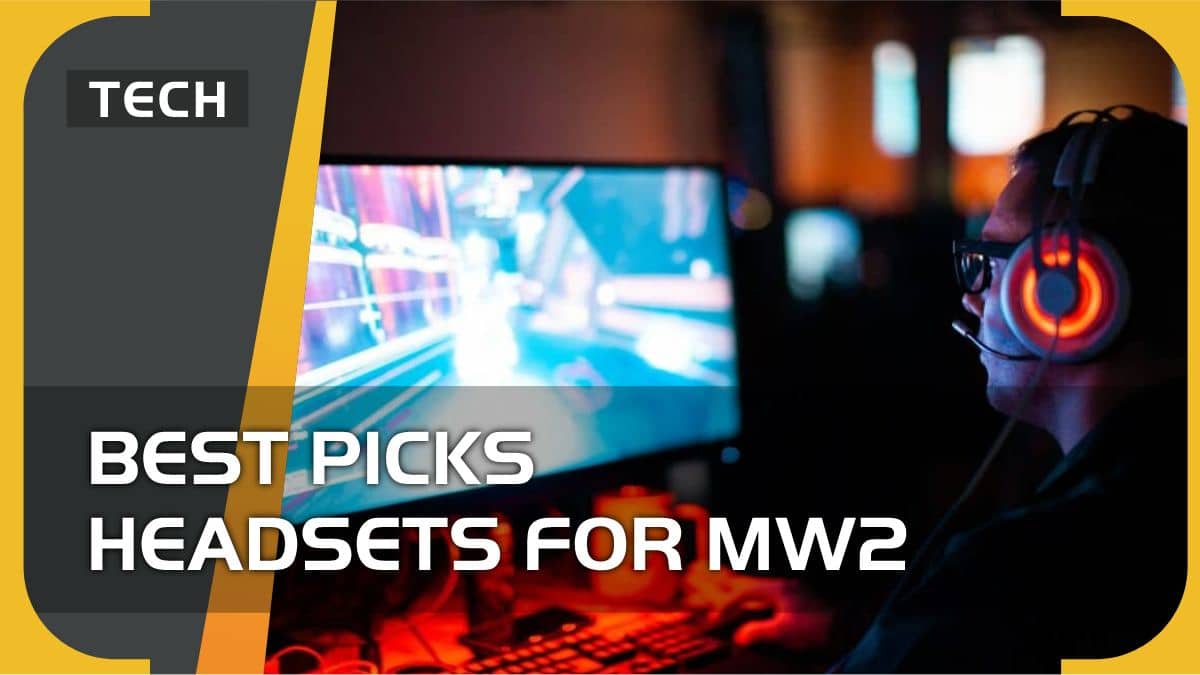 Updated on February 3, 2023 by Amaar Chowdhury

We know how dependent on good equipment competitive game-play is, which is why we’ve compiled a list with the best gaming headset for Modern Warfare 2. With tiny, close quarters maps such as Shoot House and Shipment – the game really benefits from being able to hear opponents footsteps.

These headsets are for both competitive and casual use, with an emphasis on sound quality, usability, and features.

Whether you’re looking to immerse yourself in MW2’s beautiful maps with the best monitor for MW2, or you’re a competitive gamer looking to hone in on opponent’s footsteps – you’re going to want to best headset for Modern Warfare 2 regardless. Similarly, we’ve had a look at the best controllers for Modern Warfare 2, including the newly released DualSense Edge, which we have already reviewed.

The headsets on this list, and their advantages, will all also apply to Warzone 2, giving you the edge over the opponents in the DMZ.

We’re going to be looking for headsets with the best frequency ranges, compatibility, connectivity and sound quality.

Here’s our pick of the best, mid-range, and budget headsets for Modern Warfare:

SteelSeries flagship headset is for the audiophile determined to use every tool at their disposal to win at Modern Warfare 2.

Equipped with the Nova Pro Acoustic System you will benefit from immersive 360° spatial audio. This will give you an extremely tactical advantage in detecting enemies’ footsteps and locating them on the map.

Active Noise Cancellation also works to your advantage, sealing your ears from the outside world so you can focus on gameplay. Virtually silent, these headphones will totally absolutely absorb you into the game, which we think is such a key factor when choosing a headset for Call of Duty.

Read More: PS5 vs PS4 – should I upgrade my console?

With a really clean design, the headset has taken a step back from the typical, over-industrialized design of modern gaming headsets. This is such a pleasant creative decision, and it pays off.

Upon handling the headset you can clearly tell that it’s been designed with the same care and class that you’d expect from a designer watch or car.

The Corsair Virtuoso sings unparalleled sound quality via its Neodymium drivers. Its uncompromising bass and frequency range allows you to hear footsteps from all angles, accurately dialed in by 7.1 Surround Sound.

Gaming with this headset is extremely comfortable due to the memory foam ear cushions. During those long-haul gaming sessions, the Corsair Virtuoso will prove to be a valuable tool with its ease of comfort.

Another benefit is the aluminium body – reducing the weight of the headphones without compromising on the professional feel.

This headset is packed full of rich features: a particularly notable one is the RGB light ring compatible with the Corsair iCUE lighting ecosystem. Looking good while gaming is such an underrated requirement, though this headset doesn’t limit that.\

The headset’s cross-platform compatibility is another huge benefit – too often are headsets strangely limited to a single platform, making switching between consoles a tedious, and unnecessarily expensive affair.

The battery life of roughly 20 hours is balanced by the ability to charge whilst using, another feature that headsets often discard.

For Call of Duty, you can’t go wrong with this headset, it’s incredibly well-balanced and feature-rich, though the price is certainly a factor to consider.

Check the price of these headphones now.

The most expensive headset on this list, the Audeze Penrose X has a lot to prove.

One of a few lossless, low-latency Wireless headsets, the Penrose X has an immediate edge over its competitors. It, for me, is the standout feature that justifies the price tag.

Crisp and accurate: this device’s audio is bass heavy and mids are equally defined. Low-latency audio is extremely beneficial in Call of Duty as hearing footsteps closest to the game’s output will give you a noticeable advantage over other players.

With the top-tier audio quality provided by the Penrose X, getting shot at has never been so exhilarating.

Check the price of the Audeze Penrose X here.

The elegant Danish design is apparent in the slick, minimalist headset, improving on the previous impressive ski goggle suspension headband design that comfortably attaches the headset to your head.  This is followed by athletic-inspired AirWeave memory foam ear cushions designed for maximum comfort, especially during long sessions of Team Deathmatch.

The Arctis Nova 7 is blessed with a fine-tuning of impressive sound quality with their Nova Acoustic System. Empowered by their SteelSeries Sonar Audio Software Suite, this technology is one of the defining features of this headset stalwart.

Hyperreal surround sound immerses you deep in the game, handing you ‘X-Ray Hearing’ to detect footsteps from all directions with utmost accuracy.

High-density neodymium magnets inhabit the drivers capable of producing audio between 10 and 40 Khz, a wealthy range of audio frequencies is audible for those who can afford it.

The Arctis Nova 7 has one of the best boom mics available in headset gaming – which is absolutely essential when communicating with your teammates. Not only that, but the studio quality means you could use it for streaming and recording too.

The Arctis Nova Pro Wireless is the SteelSeries flagship headset, though the Nova 7 champions a cheaper price point, for this reason, we think it is the best mid-range headset for Call of Duty whilst also being an entirely affordable beast.

Check the price of the SteelSeries Arctis Nova 7 Wireless now.

With a comprehensive range of device compatibility, which we understand to be a key problem in Gaming Headset design, the EPOS H6PRO will work on all current devices.

This means that if you’re constantly switching between the keyboard and controller, this headset is easy enough to plug and unplug without too much hassle.

At a genuinely affordable price, you are sacrificing wireless capabilities, though a cable provides you with a higher level of accuracy and reduces latency issues drastically.

The detachable lift-to-mute mic is a welcome addition, though this is more suited to streamers with a stand-alone microphone.

Sound quality is as you’d expect from what used to be Sennheiser’s Gaming Headset division, so if you enjoy a bass-heavy gaming experience, this is a great headset for you.

An interesting feature is EPOS’ BrainAdapt technology that filters audio so the brain can process the sound with a lower cognitive load, increasing reaction times which is a massive factor in FPS decision-making.

Another bonus is the earthy green metal color palette which stands out against the current trend of monotonous color palettes in the gaming peripheral industry, though you can stick to the black design if you so desire.

Comfort is this headset’s forte and after extended use, it will not bother you in the slightest.

Check their price of the EPOS H6PRO now.

With Call of Duty: Modern Warfare 2 being released this fall, we expect a good portion of gamers will be likely to return to the series a good thirteen years after the release of the original MW2.

We understand that many returning gamers will be reluctant to spend hundreds of dollars on peripherals, and will instead be keen on snagging some cheap yet useful headsets instead.

Here are a few budget headsets that we think will keep you on a level playing field as those with high-end products.

Razer is a household gaming name, and for good reason. Their peripherals are generally known for being affordable for entry-level gamers who want to experience the benefits of specialized equipment.

The Razer Kraken X is a great entry-level product with a price that may shock you.

For casual gamers, it’s a great introduction to the level of sound quality you might need to contend with competitive competition.

Lightweight and with a classic chunky design, the Razer Kraken Pro’s stupidly low price really makes you question the prices of other high-end headsets.

With 7.1 Surround Sound, you’ll be able to locate footsteps within a map with the same precision that a luxury headset might have.

Admittedly, the frequency range does let you down: 12 – 28,000 Hz is slightly more than half of some of the above-mentioned headsets. That being said, the sound quality of this headset should not be denigrated that easily.

Decent bass and quality mids are all you need sometimes – besides, in explosion-plagued Call of Duty maps you might prefer a more sensible sonic range in order to best focus on gameplay.

The headset sits comfortably on your head, and the clamping force exerts an almost relaxing pressure onto you. Coupled with the lightweight build quality, this headset is an extremely comfortable crown to wear while gaming.

Though, as you’d expect, the microphone quality on this headset is ‘budget-friendly’ quality. Compared to higher-end microphones, this one doesn’t have all the shiny perks and benefits of hundred-dollar build quality.

Background noise is minimized by inbuilt software that targets audio from your mouth, though you can expect fuzziness and crackly quality at times.

See the price of the Razer Kraken Pro here.

Logitech is another well-known brand for computer peripherals, and their G Pro X highlights exactly why.

With a quality build comes a reasonable price, and even better performance.

Though throttled by a minimal frequency range, still the headset boasts impressive bass and leveled mids.

DTS Headphone:X 2.0 Surround Sound will assist you in locating enemies on the map, and the USB sound card allows you to program an equalizer and fine-tune audio information. The USB sound card is a welcome add-on, and for the price, this feature is extremely beneficial.

The headset was designed with the help of professional gamers, and the headset comes equipped with a few hotkeys that can be used to switch between pre-programmed audio modes. This feature elevates the product above much of its competition and is partly why this headset is a staple of the budget headset selection.

See the price of the Logitech G Pro X here.

What are the best Modern Warfare 2 audio settings?

After a bit of fiddling, we’ve found the following settings to give you a solid baseline for a good balance of sound. Feel free to fine tune our choices for your personal preference.

What are the best headsets for Modern Warfare 2?

As detailed above, here are the best gaming headsets for Modern Warfare 2:

How to choose the best gaming headset for Modern Warfare 2?

These are the most important things to consider when choosing a headset for Modern Warfare 2:

It is not too game-changing if it is wired, or wireless, though low-latency wireless is preferred.

Who makes the best gaming headsets?

SteelSeries makes an astounding range of headsets, and their headsets feature heavily in this list. For that reason, we deem them the best headset maker.

Do you need surround sound to play Modern Warfare 2?

No, you don’t necessarily need surround sound to play Modern Warfare 2, though it does help you hear footsteps and detect their location much easier.

How to hear footsteps in Modern Warfare 2?

The best way to hear footsteps in Modern Warfare 2 is with this calibration:

Do I need a microphone to play Modern Warfare 2?

No – a microphone isn’t required for Modern Warfare 2, especially if you are playing on your own.

Though, we do recommend that you use a microphone for Co-op game modes such as Call of Duty: Warzone.

Are gaming headsets worth it for Modern Warfare 2?

Gaming headsets are a good investment as they can improve your gameplay. Though, this doesn’t mean that they will make you a better gamer. In fact, sometimes playing a game with minimal equipment allows you to focus better and play in a much more natural way.