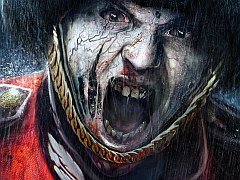 A couple of months back, Bill Clinton appeared on The Daily Show and began to discuss computer companies, before briefly touching upon the subject of video games. “Anybody that’s ever been like me hooked on a video game knows you got to have good simulation to keep yourself in a constant state of anxiety,” said the former president. It’s fair to say Bill would almost certainly like ZombiU, a game that so consistently induces fear, stress and nervous tension, that it can only possibly be an excellent simulation of a zombie apocalypse.

You play as a lone survivor, waking up in a ruined London only to discover that its inhabitants now want to eat your brains, rather than sullenly barge into you on the Tube. It’s not long, however, until you have an ally named The Prepper, a resourceful Yorkshireman who communicates with you through the speaker in your GamePad. There’s a neat excuse for this – The Prepper has built a safehouse containing a tablet-like device with which you can scan the environment – and if it’s one of the more overtly ‘gamey’ elements of ZombiU, it doesn’t jar with Ubisoft’s carefully crafted fiction.

Perhaps ZombiU’s biggest triumph is in making zombies scary again. Games, cinema, even TV is now saturated with the undead, to the point where they feel less of a threat than they used to. ZombiU gives them their potency back. In fact, it makes a single zombie something to be feared. Creeping into a room with but a single walker is nerve-wracking enough; add a couple more and you have to be very careful indeed. You’re not an SMG-toting marine, but a scared-shitless everyman (or woman) with extremely limited resources: weapons are scarce, ammo is in scant supply, and your best friend for the opening stretch is a cricket bat.

After a while you’ll master the art of the perfectly-timed swipe, judging the exact distance at which your swings are most effective. But even so, there’s still something primal and frantic about these encounters. It’s partly down to the panicked grunts, shallow breaths and whimpers you’ll hear as you bat your enemy back. The sound design here is award-worthy, not least its sparing use of music, but the developer does even more with silence. In the quiet, the slightest noise makes all the difference. You’ll hop through a low window, hear a sound and wonder whether that was merely your feet hitting asphalt or something more sinister lurking in the dark. You’ll be desperately prodding your pad’s scanner to ping the environment to see what it is, and you can’t even be sure that’ll help you: red marks on the map could be a zombie, but it could just as easily be a crow, while seemingly dead corpses can and will spring back to life. At one stage, I became aware of an insistent, fast-paced thudding: desperate to locate the source, I began swinging the camera around, pinging madly as I prepared for an imminent zombie attack. It turned out the sound was my own heartbeat.

Scripted scares, meanwhile, ensure that you can never feel entirely safe. You’ll retrace your steps in an area you cleared out only to find a zombie at the top of a flight of stairs. You’ll pass through a refrigerator with hanging meat and a dangling walker that isn’t as dead as she first seems. There’s an astonishingly tense sequence in a nursery with a shock you can see coming a mile off, but which is nevertheless so expertly timed that it genuinely left me shaking. I wouldn’t say they’re cheap, either: the game uses them sparingly enough that they only contribute to the sense of overwhelming dread you feel as you enter a new area. Elsewhere, there’s a bravura set-piece that sees you barricading the safehouse from a horde of zombies that matches Resident Evil 4’s famous barn siege for blistering intensity. It’s an early difficulty spike that leaves you in no uncertainty as to how hostile this world is.

ZombiU ups the stakes further with its treatment of death. Get cornered by as few as two zombies, and you can easily end up being forced to the ground as they snack on your face. Death is final, so when you awaken, you do so as a new survivor, your immediate objective being to retrieve the items from the reanimated corpse of the character you were just playing as. Die often, then, and you’re only making it harder for yourself. You can opt to ignore recovering your spoils, of course, but in this world it feels wasteful to do so. There’s something oddly poignant about pulling the trigger on the 37-year-old shop assistant you spent the last two hours with. Indeed, knowing nothing more than their name and occupation is enough for you to form a strange kind of attachment to them, particularly those who last longer than five minutes. They all have slightly different abilities, too: some can run faster, while others are more efficient combatants, a neat touch that reminds you you’re not just respawning but inhabiting another body.

So rich is the atmosphere that I genuinely found ZombiU hard to play for more than an hour at a time. There’s a desolate bleakness about the world and the way it’s presented: with washed-out colours, dim lighting, and a sickly green-grey tinge to the image you’d hardly say it’s beautiful, but there’s an authentic, lived-in ugliness to the world that more than compensates for any minor graphical shortcomings. Meanwhile, the GamePad is so well-integrated that even its more gimmicky features – tapping in passwords, jabbing the screen to open a manhole shortcut – don’t ease the tension. Indeed, being forced to look at the small screen on occasion only sparks your imagination to life, your brain warning you of the terrors you can’t see as you glance away from the TV. Monster movies are always scarier when you can’t see what’s stalking the protagonist. The same applies here, more so because you’re the one in peril.

It’s a pity, then, that ZombiU falls victim to the same issues that blight many of its cinematic inspirations. The desire to escalate the action means the closing stretch isn’t nearly as frightening as what came before. Zombies are more plentiful, weapons are more powerful, and while it’s still a fight for survival, the horror element has by now lost much of its impact. A reliance on more fantastical elements, meanwhile, sits uneasily with the realism – if that’s the right word when talking about the dead roaming the earth – elsewhere. The multiplayer element is very briefly entertaining, but feels like an afterthought, and so I’m going to treat it like one by not saying any more about it.

Besides, ZombiU has more than enough value as a solo experience to strongly recommend. It’s a hell of an achievement for a launch title from a third-party team getting to grips with strange new hardware – who’d have thought that not Nintendo but Ubisoft would have created the defining Wii U experience? Beyond that it’s a welcome return for true survival horror, where death is around every corner of this brutal world you timidly creep around.

Played through the campaign for a total of 12 hours and had a few games of multiplayer afterwards. Found the crossbow. Dropped the GamePad twice. Shrieked like an infant once.

A welcome return for true survival horror, where death is around every corner of this brutal world you timidly creep around.
8 Intense and properly scary Brilliant use of light and sound Thick, rich atmosphere Latter stages disappoint